WILD CARDS optioned for a movie

The Wild Cards superhero anthology series - co-created by George R.R. Martin and Melinda Snodgrass in 1987 and featuring numerous talented SFF writers - has been optioned as a 'modest-budgeted' film project by SyFy Movies, the newly-established film arm of the SyFy Channel. 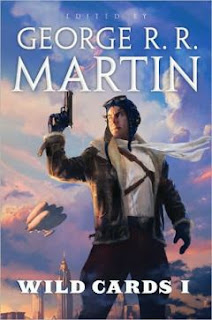 In the Wild Cards universe, an alien virus infects Earth in 1946. 90% of humans are unaffected, 9% are turned into mutated monsters and cretins (known as Jokers) and 1% become superhumans, capable of amazing feats (Aces). The Wild Cards series - currently consisting of 22 books - charts an alternate history of the world over the course of decades, reflecting the appearance of the Jokers and Aces.

The movie project will feature a contemporary setting, though whether the film will feature a modern origin story for the Wild Cards mileu or will simply slot into the pre-existing continuity is unclear. So far, only the option has been announced and the project faces many hurdles before it gets to the big screen.
Posted by Adam Whitehead at 18:48