Erevis Cale is a butler in the service of the Uskevren family, a merchant house of Selgaunt. He is also a skilled assassin and a secret priest of Mask, the god of rogues, whom Cale has an ambiguous relationship with. When the Uskevren estate of Stormweather is attacked by assailants using powerful sorcery, Cale sets out to track them down. He is aided by his old friend, the halfling Jak Fleet, and an old enemy, the Zhentarim assassin Drasek Riven, who seems to have also been granted Mask's favour... 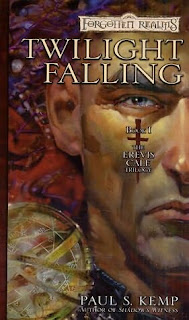 It's been about a decade since I last dipped into the world of Forgotten Realms fiction (in novels, anyway). I'd read many books in the setting during my teenage years and in my experience the good writers and books (Troy Denning, James Lowder, early R.A. Salvatore etc) were massively outnumbered by the bad ones, to the point where I decided to give up on the novel line shortly after the launch of the 3rd Edition of the setting, though I continued to run D&D games in the Realms for many years. Over the last few years I've heard enough good things about Paul Kemp's work in the setting to finally convince me to return to the Realms and give his work a go.

Twilight Falling is a standard D&D novel with a twist. There's some villainy afoot which may threaten the Realms and some heroes have to set out to defeat it. The twist is that our heroes are distinctly morally dubious: both Cale and Riven are murderers and assassins in the service of one of the Realms' dark gods. Cale is aware of his moral conflict and strives to live a good life, using his friend Jak as his moral compass, but at the same time is prepared to use the divine powers Mask grants him as a priest to further his own ends. This is helped by the fact that many of the enemies Cale faces are truly evil or in the service to the few gods in the Realms more heinous than Mask, but this also helps further the possible corruption of Cale: will there come a point when his service to Mask leads him into conflict with someone who can't be dismissed as 'even worse'? Hopefully, though it doesn't happen in this book.

Outside of this moral maze, the book proceeds straightforwardly, with the POV alternating between that of Cale's band and that of the enemy, a bunch of evil adventurers out to acquire a powerful magical artifact. This POV system is entertaining, as we see the two sides trying to outwit one another, and breathes life into a standard maguffin-hunt storyline. 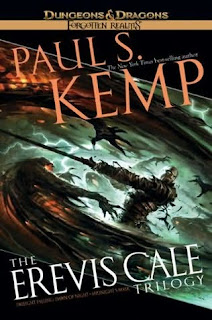 The writing, for the most part, is okay. Some of the cover blurbs for the book hyperbolically claim that Kemp is batting at the same level as Gaiman, Martin and Pratchett, which is not the case (or rather not yet; Twilight Falling is only Kemp's second novel and he has since penned eight others). Rather, his writing gets across the story and characters effectively. Occasionally he summons up some interesting imagery, but there are also some clunkers: a reference to 'programming' a spell jars badly with the setting, for example. Kemp also falls into the painful trap of putting roleplaying elements into a novel, with clunky attempts to rationalise game rules in a fictional narrative that don't work and in some cases are inconsistent: Mask's priests are apparently unable to convert spells into healing magic, but no reason is given for this, whilst elsewhere Cale and his friends undertake several days of hazardous journeying when they could have purchased teleportation magic considerably more easily. There are also moments when Kemp's knowledge of the Realms as a setting seems flawed: several locations are stated to be on the coast of the Dragonmere when they are in fact several hundred miles away. Since the writing flows well and is inoffensive elsewhere, these moments when the story falters are rather unfortunate.

Twilight Falling (***) is an effectively-written adventure story with some nicely conflicted characters. The writing hints at more interesting depths and the book is good enough to make the reader want to come back for the sequel (this book ends on a huge cliffhanger). However, there is much room for improvement. The novel is available now in the UK and USA, or as part of the Erevis Cale Omnibus (UK, USA).
Posted by Adam Whitehead at 13:52

Hmm I abandoned the Forgotten Realms novels for a reason... I do seem to keep hearing about Paul S. Kemp though...Sounds like it might be worth checking out.