Azriim and his slaadi allies have succeeded in tapping the magical mantle of Skullport, delivering tremendous power into the hands of their lord and master, the Sojourner. They now find themselves joined by Riven, who has betrayed Erevis Cale to choose the winners' side. As the Sojourner prepares to execute the final stage of his plan, Cale and his remaining allies must gather all their remaining resources to thwart him. 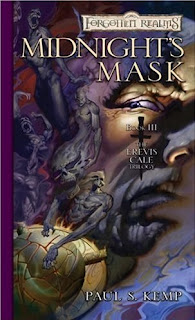 Midnight's Mask concludes the Erevis Cale Trilogy in fine form, tying up the trilogy's storylines and plot points in a satisfying and even surprising fashion. In the first two books the Sojourner's ultimate objective is not revealed, but in this finale Kemp executes one of the better surprise endings in the epic fantasy genre when it comes to his main villain's motivations.

Before we get to that ending, the story takes in a number of clashes between Cale and Azriim and their respective bands of heroes and villains, not to mention a brief but highly memorable interruption by a third faction. There's some impressive sea battles and the final showdown is appropriately epic, but Kemp gives more focus to his characters' internal struggles, particularly to Cale's development as he continues to try to keep his morality despite being the chosen servant of a dark god and his battle to retain his humanity after being transformed into a shade. As a parallel to Cale, Riven also develops nicely as he schemes to seize Cale's position as the First Chosen of Mask.

Whilst the book has an impressive ending, the explosions and magical exchanges are but a sideshow to a surprisingly emotional climax, as not all of our protagonists make it to the end and even the Sojourner is revealed to have a sense of the nostalgic (albeit a highly warped one). Ultimately, Kemp's success with the trilogy, after a somewhat rocky start, is to deliver a story where the focus is on the characters and their emotional journey as much as the somewhat expectation-defying narrative.

Problems remain. Kemp's prose and storytelling has improved a lot over these three books, but there's still the odd clunky line. His characterisation is solid, but he occasionally falls back on over-repetition of minor character details (we know Azriim is a fussy dresser already). The odd situation where D&D rules are blatantly being dramatised also still appears, such as characters making their saving throws or praying for spells in a rather mechanical fashion. However, these issues are less prevalent than in earlier volumes, and do not mar an otherwise fine book.

Midnight's Mask (****) brings the series to a successful conclusion, making the trilogy well worth the effort of checking out. The novel is available now in the UK and USA and also as part of the Erevis Cale Omnibus (UK, USA).
Posted by Adam Whitehead at 18:44

The Erevis Cale trilogy was probably one of the more enjoyable Forgotten Realms trilogies for me outside of the early Drizzt stuff. I really liked his character and that's usually the biggest thing that wins me over in a book.

The mechanics of D&D usually don't bug me too much in the books since I grew up playing it, but it isn't always as smooth as other fantasy novels. I guess I just kinda learn to roll with it in these D&D themed worlds.