The Iron Jackal by Chris Wooding

The crew of the Ketty Jay, fresh from defeating an incursion of the nefarious Manes, have been hailed as heroes and have become minor celebrities across the lands of Vardia. Avoiding notoriety and seeking their next job, Captain Frey and his crew have relocated to Samarla to undertake a train heist. Unfortunately, what was supposed to be a straightforward caper turns into a major crisis, with Frey's life on the line and a supernatural force hunting the crew, known as the Iron Jackal... 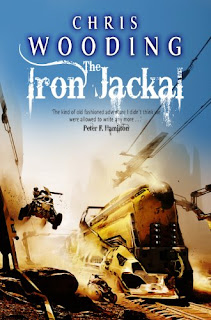 The Iron Jackal is the third book in the Tales of the Ketty Jay series, following on from the excellent Retribution Falls and The Black Lung Captain. As before, the novel follows the crewmembers of the airship Ketty Jay as they get into various scrapes. Once again, Chris Wooding has delivered a tight narrative which mixes in humour, adventure, character development and worldbuilding in a near-perfect mix, but done it with even more flair and panache than the previous volumes.

The book is built around an escalating series of adventures: after the initial train heist, the crew have to take part in a dangerous aircraft race through a maze of canyons, break into the Archduke's palace and finally cross a burning desert to find an ancient city. The pace is fast and relentless, but Wooding finds time to give every character a moment to shine as each one faces his or her own challenges (internal or external). This also extends to some newcomers (the Ketty Jay acquires a new crewmember in this novel) and recurring characters as well. Frey himself ends up as the best-developed character in the book and manages to gain the reader's sympathy as his plight worsens with every passing chapter.

Wooding introduces a sense of weirdness and horror to the series that wasn't as prevalent in previous volumes. The Iron Jackal itself is a sinister, threatening creation, and the showdown in an ancient city is appropriately nightmarish (though a titanic enemy introduced in the last few pages feels a little unnecessary). There are also intriguing hints about the distant past of the world that could fuel discussion on internet message boards for a while. At the same time, Wooding lightens things up with an appropriate level of humour (Pinn's decision to become an inventor and his attempts to experiment on the ship's psychotic cat provides a rich seam of comedic moments) and expertly maintains a precarious balance between the darker and lighter elements of the novel.

There's also the feeling of an expanding scope in this novel. A third war between Vardia and Samarla seems to be brewing and there's a sense of greater geopolitical events going on in the background which the crew of the Ketty Jay occasionally brush against the fringes of. Wooding also seems to be laying pipe for future novels, with mentions of distant, newly-discovered landmasses where colonisation efforts by Vardia seem to be going wrong. Intriguing stuff, which adds elements of depth and richness to the world not present in earlier books (though there isn't a map, as Wooding wants to retain the freedom to change things or add in new locations for future novels).

With near-perfect pacing, strong characterisation and an addictive mix of adventure, good humour and flashes of dark horror, The Iron Jackal (*****) will likely emerge as the most purely enjoyable, fun SFF novel of the year. Heavily recommended. The novel is available now in the UK and on import in the USA.
Posted by Adam Whitehead at 11:31

Email ThisBlogThis!Share to TwitterShare to FacebookShare to Pinterest
Labels: chris wooding, tales of the ketty jay, the iron jackal

How is this series designed. Are the books individual reads, a trilogy, or a series with no end in sight? I've been somewhat curious but don't want to wait 10 more years for it to come to a close.

Fantastic, I know I've commented before saying I've been eagerly awaiting this after the last two adventures which have been strong. Also would like to commend the sensible pricing in the kindle store. A price differential where I don't feel ripped off paying for the kindle copy instead of a hardback. Quite why Gollancz manage that with this and not Wise Man's Fear..

The books are episodic. Each book has a primary storyline that stands alone, but character development continues from book to book. It's a bit like an episodic TV series where you can dip in and enjoy the story for what it is, but you miss some character nuances and depth from the earlier books.

Hey Adam. Sorry for the comment spam but I couldn't find an email address for you. Want to add this post to BestSFBooks?

Just picked up my copy, I loved Retribution Falls and The Black Lung Captain, and can't wait to get stuck into this.