HBO to bring THE DARK TOWER to the screen

HBO has stepped up to the plate and picked up the Dark Tower TV project. The extremely ambitious adaptation of Stephen King's seven-volume novel series consists of a TV series and several interlinked theatrical movies. HBO has taken on the TV leg of the project, whilst producers Ron Howard and Brian Grazer have reduced the budget of the first movie by $45 million, apparently making the project viable again. Javier Bardem remains attached to the role of Roland Deschain. 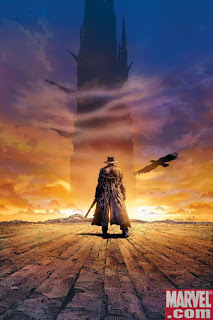 Good news. This project sounded insanely ambitious, perhaps even unrealistically so, but cool that it seems to be back on the drawing board. HBO also seem to be continuing their foray into the fantastical, adding The Dark Tower to a fantasy line-up now consisting of True Blood, Game of Thrones and the forthcoming American Gods.
Posted by Adam Whitehead at 19:22

This has so much potential, that I think HBO is likely one of the only companies to pull it off. I love the idea having the series interspersed with films, could be an amazing experience. I just hope it all works out.

Excellent news. I think the Dark Tower series goes up and down in quality, but I'm glad to see it brought to television (and film).

I wonder how expensive it would actually be to make it. Most of the first book probably wouldn't be more expensive than your average western film. The second has some things in it that are expensive, but most of it takes place in a modern setting. And so on and so forth - a surprising amount of the series is set in modern settings.

Should I read Dark Tower now? It's been on my radar for years but is always preempted by the next great author in epic fantasy....

if they do this right it will be spectacular ... fingers crossed!

Probably the same abomination as the game of thrones. Sad.

This is great news. HBO just got a new subscriber.

I should get round to reading the books now the series is done. I need to clear out a couple of other unfinished series first though.

So very exciting! I am through book 4 and need to get back to it.

One of the best fantasy series out there, I like to think of it as Narnia for grown up’s. I wish HBO would do the entire thing. They could probably adapt the entire series in three seasons of 10 episodes. Shouldn’t cost much in comparison with a series like Game Of Thrones.

3 movies + a series set in between the movies doesn’t sound like a good way to do it, I assume its supposed to be possible to just watch the movies, how could that possibly work?

This is exciting. I just wrote an article about American Gods being adapted into an HBO series.

After finishing the Dark Tower series I swore I would never read any other Stephen King book.

Willfully unimaginative, with this series King holds his readers in contempt. Long may he rot.