Sony Pictures TV are working on an adaptation of Diana Gabaldon's Outlander series of novels. The books feature a young woman who is periodically shifted in time from 1945 to 1743 and back again, becoming embroiled in a time-spanning love triangle as well as the major historical events of each period. There are currently seven novels in the series, having collectively sold more than 20 million copies over the last twenty-one years. An eighth novel will be published in 2013. 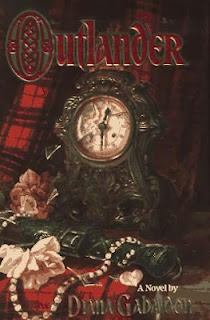 Ronald D. Moore, best-known for his work on the new Battlestar Galactica (and, before that, Carnivale, Star Trek: The Next Generation and Deep Space Nine), is working on the script for the project right now. The project is still in the early planning stages and no casting announcements are expected for some time.
Posted by Adam Whitehead at 23:29