Eastbound and Down: Season 2

Having totally messed up his life in Shelby, ex-baseball pitcher Kenny Powers has fled to Mexico. Here he ekes out an existence raising fighting chickens, until he is recognised by the coach of the local struggling baseball team and drawn back into the game. At the same time, he is on a personal quest to track down the enigmatic 'Eduardo Sanchez' and to put his life back together, with the help of his old sidekick Stevie. 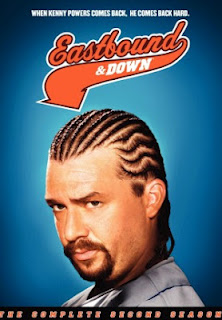 For its second season, Eastbound and Down abandons most of the previously-established cast and setting and heads south of the border. Here it's business as usual, as Powers attempts to get himself back to fame and glory but constantly sabotages his prospects with his crass humour, narcissism and total lack of concern for other human beings.

The first season of Eastbound was a success due to the premise and many of the individual gags and ideas being quite funny, with some genuinely solid character development taking place under the avalanche of fairly low-brow humour. The second season at first looks like it's going to continue this trend, with the show's embracing of a new setting (and culture) being a fairly brave move. It would have been easier to have stayed in Shelby and simply churned out six more episodes of the same. However, by a few episodes into this second season, it does feel like the move to Mexico was pointless. The show doesn't make much of its setting (beyond a few lazy gags, though nothing too offensive; HBO has a lot of Mexican viewers) and the structure of the second season is pretty much a retread of the first.

Once again, Kenny is responsible for many of his own problems but, having apparently learned nothing from the events of the first season, enjoys much less of the viewer's sympathy this time around. Again, he is surrounded by friends and allies who want him to succeed, but his constant poor treatment of them and failure to make the most of the good opportunities that come his way makes you wonder why they bother. Crucially, the show is simply not as funny as the first season. Smile-inducing gags are rare, whilst genuine laugh-out loud moments are extremely few and far between.

As before, Danny McBride is watchable and is able to make the viewer cringe in horror at his antics, but is less sympathetic this time around. Most of the cast, new and recurring alike, do good work with limited material, with Don Johnson being particularly amusing in his ability to dish out really terrible advice and make it sound plausible. Efren Ramirez is terribly under-used as Kenny's new neighbour, unfortunately, and oddly the double-act of Deep Roy and Joaquin Cosio, initially established as recurring enemies, disappear quite quickly despite their great comic potential.

This latter issue probably best sums up Eastbound and Down's second season (**½): a great deal of potential, but little of it fulfilled. If you were a huge fan of the first season, there's enough here to just about scrape by, but otherwise a disappointment. The show is available now in the UK (DVD, Blu-Ray) and the USA (DVD, Blu-Ray).
Posted by Adam Whitehead at 20:56