Half a century in the future, the human race has survived several brushes with extinction. True AI has been created but - so far - has been benign and helpful. A terrible nuclear incident has taken place, but humanity has endured. As each bullet is dodged, so mankind's chances of survival to a brighter future appear to be growing...until an ancient alien artefact is recovered from Earth orbit which harbours a terrible truth about the nature of the universe. 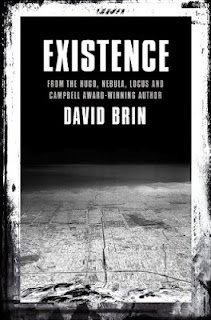 After almost twenty years as an important and relatively prolific voice in the hard SF field, David Brin dropped out of the genre in 2001 after the publication of Kil'n People. He's remained active, penning non-fiction and the occasional short story as well as working in comics and doing consulting work, but no more novels have appeared, either stand-alone or in his Uplift universe. Now he's back with Existence, a self-contained, epic SF novel about mankind, our place in the cosmos, why we seem to be alone and where our destiny lies. Certainly if you're going to mount a comeback, there's no better way than doing so with your most ambitious work to date.

Existence revisits the Fermi Paradox, that familiar problem of how, given the sheer size and age of our galaxy, it is implausible that intelligent life has not arisen elsewhere and left visible traces of its presence. Brin's solution to the paradox is both intelligent and, initially, deeply depressing: that the minefield of threats that each race must survive to reach the starts is so extensive that very, very few make it. The novel's opening sections dwell deeply on the threats to mankind's own existence, from climate change and the threat of nuclear war to the possible 'threat' of super-advanced AI. The discovery of the alien 'guidestones' then provides a possible answer, but one which is not to our liking.

The novel unfolds on a large scale, with characters in America, in undersea habitats in the Gulf of Mexico, in floating bases above drowned Pacific island nations and in ruined mansions in Shanghai having their own part to play in the global mystery that unfolds. Our protagonists include a spoiled rich kid who races suborbital rockets for fun, a Chinese sailor who lives on the salvage he dredges out of the sea, a hotshot reporter caught up in a horrendous disaster and a self-obsessed, politically-motivated novelist who slums it as a Hollywood script writer (any similarities to the late Michael Crichton being presumably coincidental). Brin's skills with characterisation - something that set him apart from his fellow 'Killer Bs' back in the day (the Gregs Bear and Benford) - are on full display here as he develops his characters through the unexpected events that engulf them whilst keeping his thematic and philosophical musings integrated with the plot. 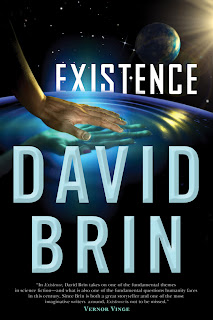 In fact, this is what sets Brin's novel apart from Kim Stanley Robinson's recent and equally epic portrait of the future, 2312. Where Robinson seems to have wanted to create a mood piece and then felt compelled to tack on an undercooked thriller plot, Brin keeps his plot, characters and musings all on track simultaneously, developing them all in tandem. This is helped by Brin's prose which has always been above average for hard SF, but in Existence hits new heights. His skill to move between harsh pessimism (the universe is cold and empty and we are a fluke who will soon splutter and die) and tremendous optimism (we can do whatever we want with the universe, if we try) is particularly impressive.

For a novel more than 500 pages long in hardcover, Existence has verve and pace. It's hard SF but done with a light touch and a sense of humour. It's not set in the Uplift universe but Brin drops in parallel-universe versions of some elements of that setting just for fun (those who enjoy Brin's depiction of futuristic dolphins will find some more that on display here). Some of Brin's moments of whimsy backfire - 'Awfulday' seems like an odd nickname for the anniversary of a terrorist attack - and some plot elements feel left behind when several time-jumps take place late in the novel, propelling us decades further into the future. But these are less than niggles.

Existence (****½) moves between being exuberant and fun and serious and contemplative (even maudlin). It asks big questions and proposes a variety of intelligent answers but doesn't resort to over-simplicity. It's definitely as good a comeback as we could have hoped for from Brin. The novel is available now in the UK and USA.

I guess I am going to have to read this AND 2312 and compare them as you were discussing on Twitter.

Nice review.
I'm not much for sci-fi, but a few years ago I read a book called Spin by Robert Charles Wilson and I've been liking for stuff like that ever since. It seems like Existence may scratch that itch.

Excellent review! I've been missing Brin's work, and it looks like this new one was well worth the wait. I'm interested in how I respond to it as compared to 2312 as well.

Adam, always appreciate your reviews.
Being fans of both Brin and Robinson, I preferred Robinson's 2312...thought it more cohesive to Brin's Existence.

Those two books are my runaway choices for Hugo this year

Sounds an interesting raed. My view regards being alone in the Universe, is if you were a sentient being nearer the centre of our galaxy, rather than being stuck out on one of it's "arms", your sky would be full of stars and hence of planets that it wouldn't even occur to you that there were other galaxies so you why would try to communicate with them?

In a classic example of judging a book by its cover, I've mostly dismissed Existence until now, not being entirely familiar with David Brin's older works. Seeing the much less awkward UK cover for the first time, however, and reading this excellent review, my interest is definitely piqued...