The neighbouring kingdoms of Permia and Scheria fought one another for forty years before the Scherian general Carnufex, known in infamy as 'The Irrigator', flooded a Permian city and killed thousands. The war ended with an uneasy truce and the two nations maintaining a neutral zone between their kingdoms, containing the very territory they spilled so much blood over. To help restore relations and build on their mutual interest in the sport of swordplay, the Scherians dispatch a team of fencers to tour Permia. The fencers quickly learn that they may just be pawns in a larger game as factions in both kingdoms attempt to use their visit as an excuse to restart the war or to seize power in their own land. But no-one has reckoned on this particular team and their individual motivations and ambitions... 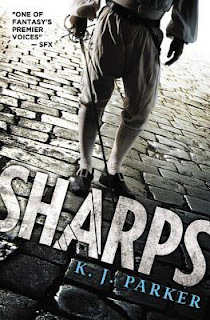 Sharps is the latest stand-alone novel from the enigmatic K.J. Parker. Parker is known for her fascination with medieval and renaissance weapons of war and basing entire narratives around them. Usually these narratives work on multiple levels, with both extensive literal use of the item in question and also its use as a metaphor. In Sharps Parker returns to her love of the sword and the sport of fencing, which she last studied in detail in her very first novel, the excellent Colours in the Steel, fifteen years ago. Sharps is a very different book, however, to both that novel and her normal output.

Most of Parker's books focus on a single character in detail, whilst Sharps has an ensemble cast. The four fencers are the main focus, along with their manager/trainer and their redoubtable political liaison officer. Parker also visits a whole bunch of bit-players on both sides of the border as different factions try to make use of the situation for their own ends. The result is a busier feel than most of her novels, which tend to be more intensely focused (sometimes to the point of claustrophobia). This works well, with each character set up and well-motivated in a concise fashion and then developed through the novel through their interactions with one another. Each character - the deadly war veteran Suidas, the manager Phrantzes, the foppish Giraut, the level-headed Addo (the son of the Irrigator) and noble Iseutz (the only female member of the team) - has his or her secrets, demons from the past or hidden motives, and Parker flips between them with verve and ease. Her trademark dry, black humour is also very much in evidence.

Sharps is an offbeat epic fantasy novel. Blood is spilled, thousands are killed and the fates of entire nations hang in the balance. Yet we see very little of it. The bulk of the book is set in the fencers' carriage (or one of them, as the have to change wagons several times due to various acts of mayhem) as they talk to one another, discuss the political situation, play chess and argue over various matters. Intermittently the novel feels like Waiting for Godot as rewritten by George R.R. Martin, with a dialogue polish by Terry Pratchett. The situation outside the carriage changes rapidly, with riots taking place and civil war threatening, but the four fencers only hear about it second-hand through confused reports, some of which may be misinformation fed to them deliberately. Neither the characters or we really know what's going on, and both will be baffled for much of the novel's length as increasingly random events take place, only being explained in the revelatory conclusion (after which a re-read of the novel with foreknowledge of the end could be an enlightening move).

Sharps (****½) is one of Parker's strongest novels to date. The characters are among her most memorable and fully-fleshed out, the structure is unusual but well-handled and allows for the politics, intrigue and backstabbing to be undertaken in a manner that does not descend into cliche. There's also a mordant wit which is deeply satisfying (especially when Parker directs it against some of the corniness of the fantasy genre). Parker even gives the book an ending which makes everything feel worthwhile, rather than pointless (a traditional weakness of some of her earlier books). The only problem is that the opening sections can feel very stilted until you get used to Parker's approach to this storyline. The novel is available now in the UK and USA.
Posted by Adam Whitehead at 18:15

100 or so pages in and already one of her best. Up there with The Scavenger Series or The Folding Knife. Love the setting and the humour which is more to the fore than previously. Also its a little more accesible than some of her other efforts and a good place to start if your new to Parker.

I'm just finishing up The Folding Knife, and getting ready to dive into Sharps. Can't wait for the read! Nice review. (And did I miss something? How do you know Parker is a woman? As far as I've been able to find out, nobody really knows.)61