Beamdog have announced that Baldur's Gate: Enhanced Edition will be released on PC, iPad and Mac on 18 September this year, with an Android version to follow a few weeks or months later. 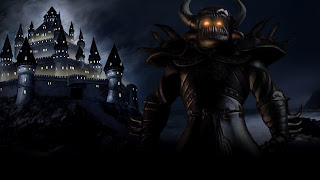 They have also given more details about what the remake will consist of. As well as being made compatible with modern operating systems and graphics resolutions, the game's user interface has been updated, with many of the improvements from Baldur's Gate II ported back to the original game. The cut scenes have been re-rendered and new cut scenes added. There are three new recruitable characters: a Calishite monk, a half-elf wild mage and an half-orc blackguard. There's also a whole new quest, in which you create six new characters and take on a formidable challenge extending across multiple levels of a dungeon. The game features the original music and voices, but also some new music and voice work. The game's expansion, Tales of the Sword Coast, has also been integrated into the original game as well.

Of course, the 'improvements' from the new edition can be, if you wish, safely ignored if you just wish to enjoy the original adventure as BioWare intended back in 1998. Assuming this is successful, an enhanced edition of Baldur's Gate II: Shadows of Amn (incorporating its own expansion, Throne of Bhaal) will follow next year.
Posted by Adam Whitehead at 19:15

Hmm. At $10 it was a no-brainer purchase, at $20, since I own the original, I'll have to think about it, and read reviews on how the ipad version came out. That moves it from a 100% purchase to maybe a 20% purchase. I hope they know what they're doing.