Comic-Con posters: THE HOBBIT and THE WORLD'S END

A whole ton of interesting stuff is happening at the San Diego Comic-Con, as usual. A lot of upcoming movies have had exclusive teaser posters released for them, and these are two of the most interesting: 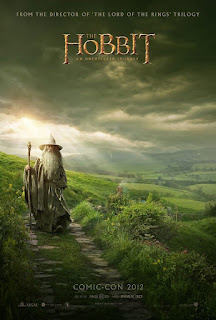 An Unexpected Journey is the first of two movies adapting J.R.R. Tolkien's The Hobbit to the big screen. The same crew are handling the project as the Lord of the Rings movie trilogy a decade ago, including director Peter Jackson. The first movie will be released this December. Principal filming on the two movies ended a week ago, with the production switching to editing and special effects work. 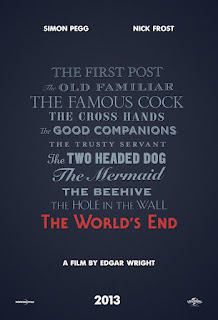 The World's End won't start shooting until September and is planned for release later in 2013. This is the third in the thematic Three Flavours Cornetto trilogy, following on from Shaun of the Dead and Hot Fuzz, and reunites director Edgar Wright with actors Simon Pegg (who also co-writes) and Nick Frost (Paul, despite featuring Pegg and Frost, doesn't count because it was directed by someone else).

The World's End is set during an unspecified disaster that threatens the entire world. Rather that played out from a traditional large-scale, global perspective, the threat is instead glimpsed through a group of characters (including Pegg and Frost) as they recreate a pub-crawl around London from a decade earlier, culminating at the World's End pub in Camden. Expect laughs and ice cream.

The trilogy is so-called because each movie features the characters eating a Cornetto ice cream whose colour is related to the movie: blood red (strawberry) for zombie horror flick Shaun of the Dead; police blue (original flavour) for crime caper Hot Fuzz; and alien green (mint) for The World's End. The title is also a riff on Krzysztof Kieslowski's excellent Three Colours series.
Posted by Adam Whitehead at 21:08

Words cannot express how excited I am for The Hobbit. December can't come fast enough!