Sergeant Gerry Boyle is an atypical Irish garda (policeman): he takes drugs, hires prostitutes and has no problem interfering with a crime scene. He also has an instinctive talent for police work and an impressive amount of luck. When an international drug smuggling operation is discovered operating in the Galway area, Boyle is forced to partner American FBI agent Wendell Everett to bring the smugglers to justice. 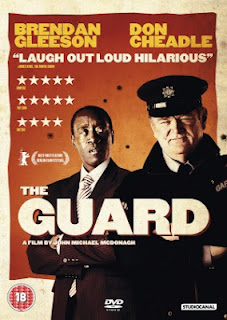 On paper, The Guard sounds like a cliche-in-waiting: a chalk and cheese buddy cop movie, in which the straight-laced FBI agent teams up with the slightly crazy Irish policeman and they fail to get along, before circumstances makes them appreciate the other's approach, leading to a happy ending and mutual respect.

This isn't that film. Instead, The Guard is an offbeat, frequently hilarious and well-characterised mini-masterpiece. The normally-excellent Brendan Gleeson is indomitably magnificent in the central role of Boyle, an offbeat and weird policeman who delights in randomly odd acts, whilst Don Cheadle is considerably more restrained (until his frustration explodes into expletive-strewn invective) as Everett. The two actors have a great chemistry which drives the film along. Another important ingredient is the interplay between our three principal villains (Liam Cunningham's Francis, David Wilmot's Liam and Mark Strong's Clive), who break up the monotony between murderous drug jobs by engaging in philosophical quote-offs and debating how best to recruit nameless goon minions.

The film's setting is also key. From the point of view of someone who lived there for a year, Galway and Connemara (a Gaelic-speaking region to the west of the city) are depicted very well. One of director John Michael McDonagh's more amusing quirks is to stage the film like a Western, with Ireland standing in for the American West, complete with saloons and shoot-outs (the film also features one of the better uses of the Chekhov's gun rule). This adds to the film's offbeat atmosphere.

The movie also features some amusing commentary about the cliches of buddy cop films and their predictability, which the film then fails to adhere to. There are also some nice emotional beats (such as the relationship between Boyle and his dying mother, and the complex relationship between Boyle's police sidekick and his wife) but these are handled subtly and not laboured over. The film ends on a note of ambiguity, which the movie then lampoons mercilessly just for the hell of it.

Email ThisBlogThis!Share to TwitterShare to FacebookShare to Pinterest
Labels: the guard

Seriously people. This movie is ridiculously funny. See it. Now.

Sounds like a fun movie, I'll be sure to catch it!

Have seen it 3 or 4 times now and still just as awesome.

For the Chekhov rule (and I know what it means), are you referring to the literal guns the kid finds or another scene?