Ready Player One by Ernest Cline

2044. The climate is wrecked, oil resources have been depleted and the world economy has still not fully recovered from the excesses of the turn of the century. Wade Watts, like millions of other teenagers, escapes the real world by playing in the OASIS, a computer programme that has combined the old Internet and numerous MMORPGs into a virtual reality existence. Five years ago the founder of the OASIS died, leaving his multi-billion-dollar fortune to whoever can solve an elaborate puzzle he left behind in the game. Millions have tried and failed...until Wade stumbles across a key clue. Suddenly a race is on: Wade and several fellow gamers competing with one another and a sinister corporation to be the first to win the prize. 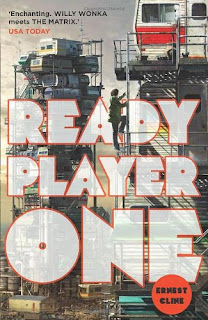 Ready Player One is the debut novel by writer Ernest Cline, whose previous genre credit of note was co-writing the 2009 movie Fanboys. Ready Player One, like that movie, is a geek-centric, nostalgia-heavy paean for the past. In this case, Cline references early video games, 'classic' movies of the 1980s and various TV shows and bands as he creates a cultural landscape which Wade must delve into to solve the puzzles left for him and millions of fellow gamers.

The book is mostly set within the OASIS, with the world outside described fairly perfunctorily. There are allusions to ecological catastrophe, peak oil, climate change and the breakdown of society, but these elements are not developed very far at all. Within the OASIS things are more engaging, with Cline creating worlds dedicated entirely to 1980s video games or to fantastical environments where the rules of nature are twisted. It's basically Second Life meets Tad Williams's Otherworld with a dash of EVE Online and World of WarCraft on top and is described vividly and energetically. However, the creations are usually built on cultural references with Cline contributing little that is original.

This is Ready Player One's key weakness. The book is a nostalgia-fest, a romp through 1980s video arcades, ancient home consoles, old-skool Dungeons and Dragons campaigns and repeated viewings of movies like Ladyhawke and WarGames. For those who get the references, it's great fun. For those who don't, the book struggles a little. Being born seven years after Cline (and the creator of the OASIS in the book), I got a lot of the references but others, particularly to the very earliest days of home gaming, were unfamiliar. Cline, to his credit, does try to explain each reference in as concise a manner as possible, but this has a tendency to slow down the narrative whilst not necessarily helping very much (my visual imagining of Joust was very different to the reality of the game when I finally looked it up online). 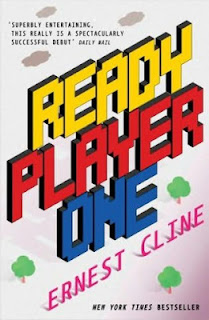 The characters are straightforward archetypes, veering very little away from the standard. Main character Wade is an awkward, non-confident nerd living with an unsympathetic extended family and being irrationally blamed for their misfortunes (when we get a glimpse of Wade's home life I was half-expecting him to be sleeping a small cupboard, Potter-style). Cline shows a rare burst of imagination in suggesting that in the future, trailer parks will be overcrowded to the point of having trailers stacked on top of one another with supporting framework and these will sometimes collapse, to no-one's particular interest. The other characters are likewise standard: Art3mis is the cute-but-determined geek girl, Aech is the loyal best friend and two supporting Japanese characters are awesome with swords and much-concerned with honour, which is an unfortunate stereotype. There are a few surprises given that we only know these characters through their online avatars and their 'true' selves turn out to be rather different, but again there are few real surprises here. The villains are, well, snarling caricatures of evil whose motivations are unconvincing and whose chief representative, Sorrento, is a laughable cartoon character at best.

So, we have a book which contributes little of its own to the genre, competently-executed protagonists and awful antagonists. Normally this would be enough to consign a book to the mediocre pile, but Ready Player One still manages to rise above this. Cline's narrative has pace, verve and energy. His ideas are standard but they are handled well, and some of Wade's less laudable activities raise issues about how healthy it is to live your life online or in computer games. Cline is celebrating nostalgia but certainly not advocating dedicating your life to it. The determination of some characters to 'change the world' with the prize money whilst others dream of building a spaceship and escaping also opens an interesting debate about maturity and dealing with consequences rather than running away from them.

Plus, the book is so much damned fun. There's spaceship and mecha fights within the OASIS, antimatter bombings, a puzzle based around the D&D module Tomb of Horrors, a 3D recreation of Monty Python and the Holy Grail and laughs than you can shake a stick at. At one point, as he ascends the levels and achievements of the game, Wade chooses as his vehicle the DeLorean from Back to the Future with a Knight Rider-style front grill and Ghostbusters logos on the side. Whether you find that amusing, eye-rollingly inane or merely unimportant will determine how likely you are to enjoy the whole book, but certainly, as a child of the 1980s, I found it fairly entertaining.

Ready Player One (***½) makes up for deficiencies in characterisation and originality with its fast-moving plot and engaging cultural references. The novel is available now in the UK and USA. A film version is in development.
Posted by Adam Whitehead at 15:18

I thought the entire premise was a fap-fest to all things geeky/nerdy. I'm old enough to recognize some of the references, but they just reminded me of things I had some disdain for growing up, which probably contributed to my low opinion of Cline's novel.

It's disposable fiction. In a generation, it'll be a footnote, if that.

I have to agree with Larry, it's like self-indulgent fanfiction. I could imagine this kind of thing existing as a couple dozen livejournal posts around a decade ago. It is utterly disposable and quite naff.

If you grew up in the 80's this is a must read. I can see where younger readers would find this harder to enjoy, but those of us that are older geeks will really enjoy this book. - Jeff

I liked the book a lot, despite the '80s references. It was really fun and entertaining.

And yeah, the tired Japanese stereotypes sucked. I didn't expect to read something as overt as that nowadays.

"In a generation, it'll be a footnote" - this point of view has always perplexed me.

OK, in a generation it'll be a footnote. How are we defining generation? 20 years? 25?

Because to me, "you can enjoy reading this book, and it may even be significant, for the next quarter of a century" is actually quite a GOOD thing. And that's assuming that once it's a footnote it'll stop being fun. But i've read Terry Pratchett. Footnotes can be fabulous things in their own right.

So what is it like NOW? If it'll be a footnote in a generation because it's not even enjoyable NOW, that's a fair criticism. But if the problem is just that, like friends, life, and the stars themselves, it is 'disposable'... well, that's an argument I just don't understand.

[I haven't read the book, so I don't know whether it's a good read or not. I'm just commenting on the idea of 'disposability vs longevity' as an important measure of a book]

Larry, as an off-and-on fantasy fan who tends to enjoy your more literary ramblings more than speculative ones--I'm with Wert here. Evaluating a book through it's predicted posterity is obtuse and pointless.

I'll admit it's a fun game to play, predicting a book's place within the framework of a particular literary canon----but it has nothing to do with my enjoyment or assessment of the book as a reader, now. I have plenty of albums, novels, artists, etc that I will argue to the death (with what I think are critical, reasoned, fair arguments) who are no more than 'footnotes' in their respective forms.

All that said--yeah, disposable fiction, not a fan. A fun read if you let yourself enjoy it, but that's about it. Reading this review a year after reading the book, none of the references even registered. Like trying to recall some vague incident from my childhood.