Lead singer of Snow Patrol to cameo in GAME OF THRONES

Gary Lightbody, the lead singer of British band Snow Patrol, has announced via Facebook that he has filmed a cameo appearance in the third season of Game of Thrones. He also included a picture of himself in costume: 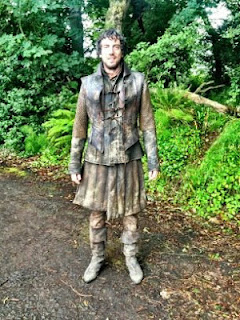 I gather this is more of a 'featured extra' thing than any more substantial role. It seems to be in thanks for Lightbody and his bandmates being huge fans of the show and frequently mentioning it on their webpages. During the filming of the previous two seasons, the band (half of whom are from Northern Ireland and sometimes use Belfast as a base of operations) hung out with castmembers and crew on several occasions.


Lightbody with producers D.B. Weiss and David Benioff in Belfast.

Interesting news. Thrones still has a very low profile in the UK, due to its transmission on a satellite channel with a tiny audience (although Thrones is by far the most popular show to ever air on it, it's still very obscure here). This has changed a little bit as more magazines pick up on it and as the DVDs and Blu-Rays continue to sell excellently. BBC Radio 1 also has featured the show several times recently as a recommended show, and in fact one DJ got into a mock-Twitter feud with Lightbody when the latter accidentally spoiled a plot twist for him. If this kind of stunt-casting can help raise the profile of the show a little over here, I'm all for it (even if at one stage I feared madness induced by hearing 'Chasing Cars' six thousand times a day, every day on the radio).
Posted by Adam Whitehead at 14:33

That's strange... I would figure that Thrones would be huge in the UK! I suppose I'm just an ignorant American... People in the UK attend Hogwarts as well right? ;)

Well, I guess I had better start posting like crazy about GoT on my blog, because I want to be on the show! I don't live so far away from Dubrovnik, so I could be in one of the King's Landing scenes.

It would be interesting to see if actors like Nathan Fillion and Charlize Theron (who are huge fans of the show) could get a cameo in the future, on the grounds they are probably too busy (or HBO too poor) to give them larger roles. OTOH, too much of this sort of thing might come across as being gimmicky.

And yes, GoT is popular amongst those who can see it. But Sky Atlantic is only available through the Sky satellite service, which relatively few people have in the UK (and most of those who do have it don't watch drama on it). GoT gets, after time-shifting and recordings are taken into account, between 1 and 1.5 million viewers, which is very good for Sky. But it's poor compared to the 5 million+ it would get airing on the BBC in primetime (say around 9pm).

That said, if the BBC did show it in primetime they'd probably panic the second the ratings twitched and transfer it to a midnight slot, like they did with ROME, and then complain about how they had to cancel it due to poor ratings. Sky, at the very least, are extremely loyal to their programmes and customers. Unfortunately it does mean that when you mention GoT to the average person in the UK, they won't have the slightest clue what you're on about.