Prague, 2029. Two years have passed since the Aug Incident, when almost every single one of the seventy million cybernetically-enhanced humans on Earth went insane for several minutes, killing millions of people and destroying trillions of dollars of worth of property. Although Adam Jensen and Sarif Industries successfully stopped those responsible for the Incident, the fear, hatred and paranoia of "augs" has increased to disastrous levels. Jensen, now an agent for Interpol working in the Czech Republic, is caught up in a terrorist bombing apparently carried out by an aug terrorist group...but soon discovers a far more complex and devious plan is in motion. 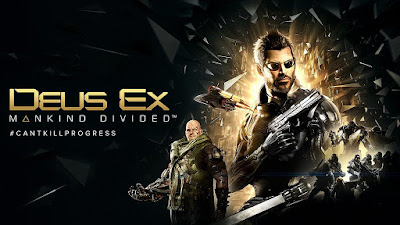 Mankind Divided is the fourth major game in the Deus Ex series and the second in a reboot prequel series which began with 2011's Human Revolution. Human Revolution was an exceptional game, offering a compelling plot and multiple ways of solving every problem thrown at the player. Mankind Divided is very much in the same vein, a cyberpunk roleplaying epic in which you play Adam Jensen and have to guide him to the resolution of a labyrinth conspiracy taking in themes such as discrimination, political corruption and media manipulation.

Mankind Divided is so close to Human Revolution in gameplay that it's a very easy game to recommend if you enjoyed the previous game in the series. It uses the same format, with a city hub area where you can pursue side-missions and the main plot, which occasionally takes you off to dedicated story locations such as an office block in London, a ghetto for cyborgs located outside Prague or a research outpost in the Swiss Alps. It would be wrong to call this a real open-world RPG, like Skyrim or The Witcher 3, but it's also not a strictly linear game either. At any one time you usually have a significant number of side-quests, storylines and optional activities to pursue.

This game improves on the previous one in several key ways. The first is that the reviled boss battles that blighted the previous game (although much improved in the definitive "Director's Cut Edition") are gone. There is a boss battle at the end of the game, but you are presented with a myriad number of options to resolve the encounter without having to resort to direct combat. This will be a relief for players focusing on stealth and hacking builds rather than combat ones. There are also more augments available and cleverer ones, allowing you to hack terminals from a distance, incapacitate several enemies simultaneously or use your wrist-mounted blades as ranged weapons. 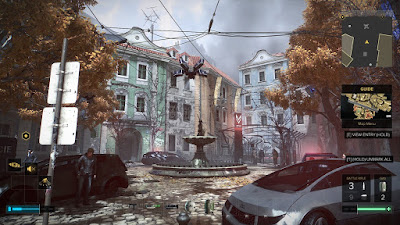 I was also extremely impressed that Eidos Montreal reigned in the scope for this sequel. The first game had two hub areas - Detroit and Hengsha - and transformed from a small-scale story about corporate espionage into a massive, world-changing epic about the fate of the human race. Rather than ramping things up even further, Mankind Divided dials things down a notch. There's still big events and Jensen's actions will determine the fate of hundreds (maybe thousands), but he's not directly saving the world this time around. Adopting a smaller scale in a sequel is counter-intuitive, especially in an age which often demands increased and more pointless bluster and explosions in sequels, but it often provides game and film series with their best installments: Mass Effect 2, The Empire Strikes Back and so forth.

Mankind Divided doesn't quite hit those heights, and on reflection it's probably a marginally weaker game than its forebear (although there's not much in it). Human Revolution started with a dramatic showdown and presented the player with some memorable, well-acted characters like Malik, Pritchard and Sarif to deliver its storyline. Mankind Divided doesn't quite do that. It's characters are a bit less vital and interesting, at least to start with, and the reasons why Jensen is part of Interpol and what he has been doing since Human Revolution's ending are not explained at all in the game (this is left, frustratingly, to a tie-in novel). In addition, the game opens with Jensen able to wander at will around Prague. This is cool and I'd notched up five hours of side-missions and exploring before I even ventured into Jensen's headquarters to pick up his first assignment. But it does remove urgency from the narrative and the story is simply a bit less interesting than Human Revolution's, not gaining real urgency until near its conclusion.

But what Mankind Divided does do is paint its world of paranoia and mistrust in stark, convincing detail. It riffs off topical events without lazily exploiting them and examines its core issue from all sides: the prejudice faced by the augmented is terrible, but it is pointed out that they did all completely flip out due to an outside agency and cause untold damage, so some paranoia may be justified. At one point we are told that the number of augs in the world has been reduced from 70 million to under 7 million: 90% of the augmented population has been slaughtered as a result of the Incident, the greatest loss of human life since World War II, which is both a startling moment and also one that dovetails into the original Deus Ex game (in which augmented humans are quite rare, despite being set 25 years after these reboots). But Mankind Divided also doesn't dwell exclusively on the paranoia and fear rampant in the population (giving the game its name). It is also a rather humane game, touching on human relationships that can bridge the cybernetic divide and encouraging players to follow non-lethal routes through the game. Like it's forebears, you can complete the game without killing a single person. 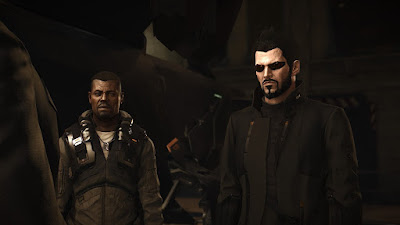 Gameplay is mostly unchanged since Human Revolution, with you often having to infiltrate secure locations and achieve objectives. You can go in all guns blazing, but it's often more fun to knock out enemies and hide the unconscious bodies, or even "ghost" through levels using air vents and hacking computers without anyone being aware that you were ever there. This is just as much fun as it's ever been, and is even better with some improved and more inventive level design than the already-impressive Human Revolution. This results in some dynamic action set-pieces that evolve organically out of you using all the tools at your disposal, getting into a firefight one moment, vanishing into the air vents and sniping guards with tranquiliser guards a moment later, hacking the alarm system to head off reinforcements and then bursting through a wall to knock out a key enemy with a well-aimed punch. It's all fluid, fast and natural, rewarding careful exploration and reconnoitring of objectives and levels.

The negatives of the game are relatively minor. The supporting cast is a bit less well-characterised than in the first game and there isn't a huge amount of backstory for what Jensen has been up to. At roughly 30 hours (for the main quest and all the side-missions) the game is quite large, slightly bigger than its forebear, but it also feels like the introduction to a much bigger story rather than a complete story in itself like its predecessor. Although the main villain is defeated at the end of this game, the shadowing conspiracy that was backing him remains at large and a mid-credits sequence (because even games have to have these now) drops a couple of major plot revelations and sets up the inevitable sequel.

Still, Deus Ex: Mankind Divided (****½) is a big, freeform, free-flowing RPG that rewards player intelligence and ingenuity. If it doesn't quite hit the same level of quality as its forebear, that doesn't stop it from being a compelling game. It is available now on PC, X-Box One (UK, USA) and PlayStation 4 (UK,  USA). A sequel has already been in development for over a year, so hopefully we won't have to wait so long for the next game in the series.

Technical Notes: I played this game on my five-year-old quad-core PC, recently upgraded to an nVidia 760 graphics card, so hardly a cutting edge system. I ran everything on High (the third-highest setting) and the game looked great. I did switch off advanced shadows to increase framerate later on. The only technical issue I encountered after that was area transitions, such as using the subway in Prague, seemed to take a slightly too long time to load. Gamers with more memory than 8GB should see that speed up pretty quickly. I also completely ignored the odious microtransactions completely and didn't feel penalised in any way: in fact, the game is a little too generous in the ammo, experience and upgrades it gives you in the main story, to the point where I barely used any of the actual in-game stores, let alone having to use the pointless Square store stuff.
Posted by Adam Whitehead at 19:53