This week the Emmy Awards aired in the United States. For the first time, science fiction and fantasy shows completely dominated the presentation, taking all of the major drama category awards. 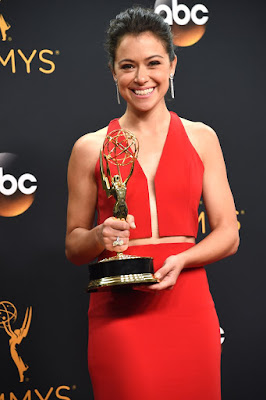 This is a far cry from a few years ago when genre shows had a hard time getting any respect or traction. The Twilight Zone won a couple of awards back in the 1960s and the original Star Trek was nominated during its first run, but there was then quite a long dry spell until the 1990s, when Red Dwarf's Gunmen of the Apocalypse won the 1994 award for Best International Comedy Series.

Greater penetration of the Emmy consciousness took place thanks to The X-Files, which won several creative awards and Best Actress for Gillian Anderson in 1997. Surprisingly, David Duchovny never won for Best Actor and the show as a whole failed to win anything for writing or for Best Drama Series overall. But it opened the door slightly. More successful was Lost, which managed to win for Best Drama Series, Best Direction for its pilot episode and Best Actor for both Michael Emerson and Terry O'Quinn.

The awards this year went to:
It's good to see SFF represented so heavily, and it'll be interesting to see if this trend continues next year when shows like Stranger Things, Luke Cage and American Gods will be eligible and Game of Thrones takes a year off (Season 7 will air too late to be eligible for the 2017 awards).
Posted by Adam Whitehead at 18:07