The creator of many of SFF gaming's most famous characters retires

Chris Metzen, the creator of the StarCraft and Diablo fictional universes for Blizzard Entertainment and the primary creative force on WarCraft, has announced that he is retiring at the age of 42. 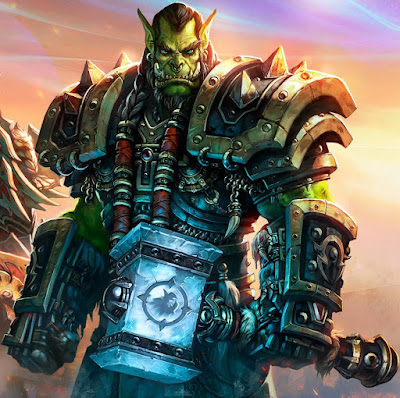 Very arguably, Metzen's most well-known creation is the honourable orc chieftain Thrall. Not only did he create the character, he provided his voice in multiple games. Metzen's other famous creations include StarCraft's Kerrigan and Jim Raynor, and several of Overwatch's roster of characters.

Metzen joined Blizzard in 1994 to work on Justice League Taskforce, a console beat 'em up based on DC Comics characters. However, he took time out to lend a hand with their in-development real-time strategy game, WarCraft: Orcs and Humans. The setting, storyline and characters in the original game were very bare-bones, so for the sequel, WarCraft II: Tides of Darkness (1995), Metzen took a lead role in design (both character and mission) and crafting the background lore for the setting. He then created the world, storyline and characters for both Diablo (1996) and StarCraft (1998) and their respective expansions and sequels.

Metzen worked extensively on WarCraft III: Reign of Chaos (2002) and its expansion The Frozen Throne (2003), which set the scene for World of WarCraft (2004). Metzen played a key development role on World of WarCraft and all six (to date) of its expansions, but the ongoing development of the game and frequent retcons of established lore due to game design limitations has frustrated some fans. Metzen returned to creative lead and design on StarCraft II: Wings of Liberty (2010) and its expansions, as well as Diablo III (2012).

After World of WarCraft's release Metzen worked on Blizzard's science fiction MMORPG Titan. Titan was eventually cancelled, but its lore, world and characters were recycled instead into the competitive online shooter Overwatch (2016), which is Blizzard's newest major franchise. Metzen also contributed the story for the 2016 WarCraft film, directed by Duncan Jones.

Metzen's early retirement is understandable given his immense workload for many years, but it also leaves Blizzard in an odd place, with the creative lead of three of its four main franchises departing at once. The future of Blizzard's single-player games has been in doubt for some time, with its focus switching more and more to competitive online multiplayer games, and it may be that Blizzard have no plans for a WarCraft IV, Diablo IV or StarCraft III at this time, which presumably would not have left Metzen with much to do.

Between Jim Raynor, Kerrigan, Arcturus Mengsk, Tassadar of the Protoss, Zeratul of the Dark Templar and Artanis the Lich King, Metzen has created some of SFF gaming's most well-known characters. He also pioneered the idea of in-depth storytelling through a strategy game interface, something that had not previously been rendered entirely successfully.

Metzen has said that he will continue providing voiceover work for Blizzard. Most notably, he will continue to provide the voice of orc hero Thrall for future World of WarCraft expansions and his cross-over appearances in online card game Hearthstone and brawler Heroes of the Storm.
Posted by Adam Whitehead at 17:49

You mean Metzen instead of second Mengsk there.

I think the early retirement has less to do with workload than the fact that Blizzard had changed direction. The simple fact is that there's more money to be made online for Blizzard and that's what they are going to go for in the future. Single-player games is history for the company.