A Korean gaming magazine has claimed that Rockstar Games are working on a new, updated version of Red Dead Redemption for PC, X-Box One and PlayStation 4. 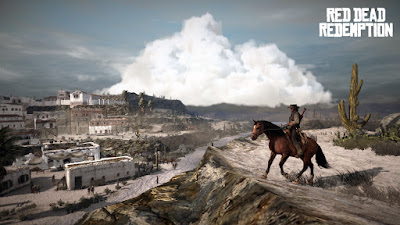 This is news is remarkable for several reasons. Red Dead Redemption is, for many gamers, the finest game Rockstar have ever released. Given Rockstar's history includes the entire Max Payne and Grand Theft Auto series, that's quite a claim. It's also generally acclaimed as the best attempt at a Western ever attempted by a video game. PC gamers, in particular, have been clamouring for their own version of the game since it was released back in May 2010. So a release on PC and modern consoles would be most welcome.

However, the chances of such a remaster have always seemed remote for technical reasons. Rockstar used the RAGE 2 engine to create their 2008 game Grand Theft Auto IV. This engine was highly optimised for X-Box 360 and PlayStation 3, but struggled when it was adapted for PC. This caused enormous problems for the PC version of GTAIV, which famously launched in a bugged and unoptimised state and which required months of patching before it was fully playable.

When Rockstar created the RAGE 3 engine, they put a large amount of time and money into optimising the engine for PC. Because the X-Box One and PlayStation 4 both use coding techniques similar to PC, this also meant that game development across all three formats was simplified tremendously. The two games Rockstar made using RAGE 3, Max Payne 3 and Grand Theft Auto V, were famously adaptable across all formats. Grand Theft Auto V's adaptability meant that it could be released on X-Box 360, PlayStation 3, PC, X-Box One and PlayStation 4, with porting between the different formats being pretty straightforward. These factors combined with the game's high quality have made GTAV the fourth biggest-selling video game of all time, selling over 65 million copies.

Development of Red Dead Redemption began on RAGE 2, with the porting problems involved, but as development proceeded elements of the RAGE 3 engine were introduced ad hoc. This created a very confusing coding situation. When the game was finally released, Rockstar were amazed that it worked properly because the codebase was a mess. Because of the code situation and the fact that RDR was a sequel to a console-only game (Red Dead Revolver, released in 2004 on PlayStation 2 and the original X-Box), they didn't even attempt to make a PC version. When the clamour for a PC version started building, Rockstar employees noted (unofficially) that a PC version was impossible without stripping out the code and rebuilding it from scratch, which seemed highly unlikely and prohibitively expensive.

This makes this latest rumour seem somewhat unlikely: to build a current-gen version of Red Dead Redemption would cost Rockstar tens of millions of dollars, money that could be spent instead on a new game. On the flipside, remasters have become huge business in the last year or so and the combined sales for a remastered RDR on X-Box One, PS4 and PC would be comfortably in the millions, making the project much more attractive. It could also act as a way of refreshing the series for new gamers before the much-rumoured, brand new third game in the series (with the long-mooted and rather obvious title Red Dead Retribution) eventually appears.

It would also explain what Rockstar have been up to for the last few years. Their last game, GTAV, was released in September 2013. Since then they have released the current-gen versions of the game (in 2014) and a series of multiplayer-focused expansions for it, but no new games. Given the size of Rockstar's operations it seems unlikely that they wouldn't have several more projects underway behind the scenes (including the presumed and inevitable Grand Theft Auto VI).
Posted by Adam Whitehead at 20:39

Why? I know everyone say it's a good game but the simple fact is that Red Dead Redemption did not sell well. Also, the western genre isn't actually a hot thing on the PC. Add these 2 together and I'll be very surprised if the game do get to the PC.

RED DEAD REDEMPTION has sold over 14 million copies, which is quite a lot. The only metric you'd say that was a failure by was GTAV's, but then everything is a failure by that standard.

Don't get me wrong. I wouldn't mind having the game on PC, I just see why Rockstar would want to do it. There are just more cons than pros to the idea. Simply put, I don't believe the rumor.

It was supposed to be confirmed yesterday and wasn't, so I think we can assume for now it was just a rumour.

But I think the argument for it is quite strong. Developing a new video game is expensive, with asset creation and design and story work being enormously expensive. Taking an old game and sprucing it up a bit, even if you need to re-code it, is much cheaper. In some cases you can put a modest budget in and get a LOT of money back (the HALO collection, TOMB RAIDER remastered and especially LAST OF US have all made a huge amount of money). Usually it's with more recent games, so BIOSHOCK is going to be a big test of if you can do that with a much older game and make it work. If that's successful, Rockstar would be foolish not to cash in. I'm actually surprised they haven't considered a GTAIV remastered in the new engine, and even finding a way of linking IV and V's locations together.