The Clone Wars rage on, but the cost in lives and money has become enormous. As the Galactic Republic votes to put even more money and resources into the war, Senator Amidala leads a fresh initiative to make peace with the Separatists. Meanwhile, renewed conflict erupts on Mandalore and Obi-Wan Kenobi, Anakin Skywalker and Ahsoka Tano travel to the mysterious world of Mortis to learn more about the prophecy of the Chosen One. 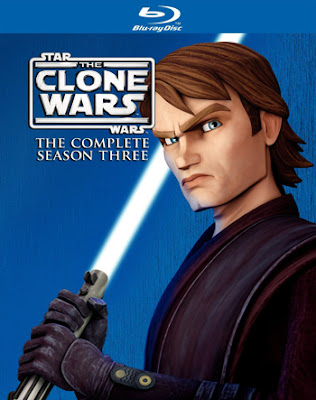 The third season of The Clone Wars is - to a certain degree - a more thoughtful one than what has come before. There are still lots of massive battles and impressive action sequences, of course, but there's also more reflective moments that seek to expand the mythology of Star Wars and further characterisation. There's also a decision to flesh out the continuity of the series: several episodes in the third season flash back to the first season and expand on events that took place previously.

This particularly benefits the character of Ahsoka. The "callow hot-headed youth" archetype has been played to death, but Ahsoka's growing maturity and her ability to adapt to different situations marks her out as a different kind of character to Anakin. Her role in the season finale, in which she joins forces with some kidnapped padawans and a familiar Wookie warrior, is particularly successful in this regard. The season also fleshes out the 501st Clone Battalion, adding more characters to the mix and showing how their ranks change between battles as recruits join and old hands pass away.

One of the bigger surprises of watching The Clone Wars is how lightly - barely at all by this point, halfway through the series run - it handles Anakin's descent to the Dark Side. The odd overzealous moment of anger here and there aside, Anakin shows little of the later rage and anger that will consume him. Instead, and more cleverly, the writers continue to deepen his emotional attachment to Padme and his responsibilities for Ahsoka, setting up how the severing of those attachments later on help pave the way for his downfall. Most successfully, the season gives us a multi-part story that explores just what it means to be the Chosen One and what bringing "balance to the Force" means, and gives us the moment when Anakin could have saved himself and the galaxy if he'd chosen otherwise.

The season also has a few lighter moments, such as an amusing solo adventure for R2-D2 and C-3PO, and several all-out action episodes, including a prison break where Anakin meets Captain Tarkin for the first time (and they discover a mutual respect, calling back to the original Star Wars movie). It also has a few disappointing episodes, most notably a multi-episode arc which seems to serve little purpose other than give us a lame (and, as future seasons show, redundant) replacement for Darth Maul.

For the most part, though, Season 3 of The Clone Wars (****) is highly watchable, entertaining and far more nuanced than the movies it spins off from. The animation is ever more impressive, the voice acting is excellent and the series retains its reputation for excellent pulp fun. It is available now as part of the Complete Season 1-5 box set (UK, USA).
Posted by Adam Whitehead at 18:36

The Mortis story arc, and its subsequent inclusion in the Fate of the Jedi novel series, effectively ended my love affair with the Star Wars Expanded Universe.

I really liked Mortis. It's one of only two stories I've watched twice, because I like that weird mysticism thing. The other is the second battle of Geonosis, because it's basically a war movie that suddenly goes all zombie film.