Winter has fallen, bringing a brief respite from the depredations of the Red Ship Raiders. Fitz, returning to Buckkeep from the Mountain Kingdom, finds Prince Verity working hard to build ships and watchtowers to defend the coast, but everywhere the conniving Prince Regal is working to undermine his brother and pave his own way to the throne. When Verity embarks on an ill-advised quest to help save his kingdom, it falls to Fitz to try to hold everything together in his absence. 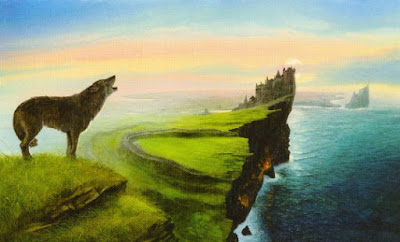 The middle volume of The Farseer Trilogy is Robin Hobb's attempt to avoid "middle book syndrome", that annoying situation where a book has no real opening or ending. As such, Royal Assassin tries to work as its own self-contained story in the structure of both the larger trilogy and the much larger Realm of the Elderling sequence beyond that.

In this endeavour, the author is mostly successful. Royal Assassin continues the storyline of Assassin's Apprentice, with FitzChivalry Farseer trying to overcome his status as the illegitimate son of a dead prince and a secret assassin to become a respected member of the court. He hopes to woo his childhood love, but King Shrewd wants him to marry for political advantage instead. Regal hopes to undermine and destroy Fitz, but Fitz's willingness to lead from the front and throw himself into battle against the Red Ship Raiders stymies him, as do Fitz's growing magical powers (in both the animalistic Wit and the telepathic Skill) and his canny support of Verity's bride, the Queen-in-Waiting Kettricken. Events boil over at the book's ending, which features a powerfully emotional moment of catharsis (arguably still the highlight of the entire sixteen-volume Elderling series to date) and setting the scene for the final confrontation in Assassin's Quest.

Hobb's facility with prose is enviable, creating a rich and engrossing fantasy world. Things may not move too far from the medieval fantasy norm and some of the worldbuilding doesn't entirely ring true (such as the vast size of the Six Duchies but the tiny size of its settlements and its apparently extremely low population), but for the most part the world of the Six Duchies is vividly and memorably portrayed. Her facility for characterisation also remains intact, with Kettricken, Patience, Burrich, Molly and Nighteyes all being well-drawn and convincing characters as well as Fitz himself. 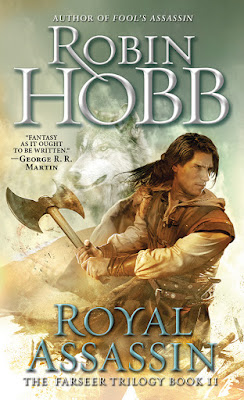 Fitz has always been a problem for some readers, especially since the trilogy is told in the first person from his perspective. In the first volume Fitz was a little too passive and reactive and that problem persists into this second volume. However, in the latter half of Royal Assassin he does become more proactive in opposing Regal's plans. He even engages in some very mild political intrigue. It's no A Game of Thrones, but it does up the stakes a little at a key moment of the story.

Some of Hobb's key weaknesses as a writer do re-emerge in this volume, however. Her ability to conjure up the unfairness of life and the mountain of problems Fitz must struggle to overcome is remarkable, but there is also chapter after chapter where Fitz stews in the alleged utter misery of his life - as a favoured servant and assassin with a cool telepathic wolf companion and a beautiful, strong-willed girlfriend who loves him absolutely - whilst not really doing anything. It's still not as much of a problem as in later novels, but there is an interminable middle section to the novel and it feels like a comfortable 200 pages could have been shaved off the page count (already approaching twice the length of Assassin's Apprentice) without too much trouble.

Royal Assassin (****) is a bigger novel than its forebear and one with more political intrigue and action, at land and at sea. However, it's also overlong and suffers the same issues as its forebear but stretched over a longer page count: a plot that kicks into gear only intermittently and a protagonist too reactive for his own good. But Hobb's skills with character and emotion, and evoking her world in rich detail, continue to prove remarkable. The novel is available now in the UK and USA.
Posted by Adam Whitehead at 17:36

Thanks for the review. It's super timely as I just finished Assassin's Apprentice. I was underwhelmed by the first book, especially the ending. Sounds like the problems largely continue here. Seems safe to take a pass then. :)

No spoilers, but I remember when I first read this book, I read the whole ending sequence and immediately read the first chunk of the next book in the same night. I don't recommend that, as it was extremely depressing :(

That said, I love Robin Hobb's characterization. As has been mentioned, the plots are a little light and some other elements may not be top-notch, but I can't think of many authors as good as Hobb at writing great characters and just conveying sheer emotion so well. I also like that Fitz, while male, is allowed to be emotional and avoids the "stoic fantasy male badass" trope that he could have turned into.

I enjoyed it a lot, even if I found it too long. One thing I did not like at all was Fitz initial sickness, and how his lost youth was supposedly going to make his life completely different, showing how high a price he had paid for being a king's man and confronting Regal. Not too long after that he is Axe-figthing and boat-rowing. Mew.

which exact 'cathartic moment'are you referring to? I could point a few, but not one to excedindly stand out.