Blizzard's WarCraft adventure game Lord of the Clans has made its way onto the Internet (link to a news article), twenty years after the game first began development. 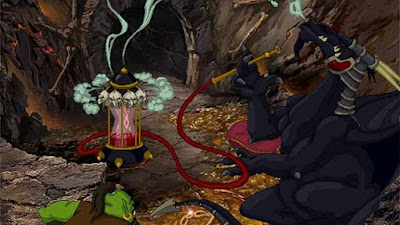 Thrall confronts Deathwing, the world-destroying giga-dragon-god-thing from World of WarCraft, and defeats him with a jetpack.

Blizzard Entertainment had been founded in 1991 under the name Silicon & Synapse. They scored an early hit with side-scrolling platform game Lost Vikings, but their first big breakout game (after a name change to Blizzard) was WarCraft: Orcs and Humans, released in 1994. WarCraft II: Tides of Darkness was released at the end of 1995 and was an even bigger hit, selling several million copies and going toe-to-toe with the Command & Conquer series for domination of the real-time strategy genre.

Blizzard doubled down on their hit franchise, crafting more storyline and lore for the game and releasing an expansion to WarCraft II, Beyond the Dark Portal, in April 1996. Whilst one of their partner studios was working on a new dark fantasy action game called Diablo, Blizzard made the then-controversial decision to start working on a science fiction strategy game. This was eventually released in May 1998 under the title StarCraft and became their first game to sell over ten million copies, transforming the fortunes of the company forever.

However, back in 1996 StarCraft felt like a big risk and some at the company were dubious about leaving the WarCraft universe untouched for several years before they could return for a full sequel. They decided to outsource development of an animated adventure game to a Russian animation studio, with Blizzard controlling overall design and writing. The Blizzard team had already envisaged a WarCraft III revolving around a charismatic orc chieftain named Thrall, so they decided to set up his story in the adventure game, which was given the title Lord of the Clans.

Work on the game proceeded for almost two years, but at the E3 show in 1998 Blizzard announced the cancellation of the title. One reason for the cancellation was that the game's code had not been compiled very well and was causing Blizzard headaches: replacing the code would have entailed a substantial and therefore expensive rewrite of the entire game from scratch, which would have meant them missing their projected release date. In addition, although the prior WarCraft games had a notable sense of humour, Lord of the Clans was an outright black comedy which was a bit tonally jarring. Finally, by 1998 the traditional adventure game market was considered to be dead or dying, with LucasArts (the market leaders) announcing that their future games would be 3D. Blizzard were concerned that their game would look far too dated by the time it arrived.

Although Lord of the Clans was cancelled, its storyline is considered canonical and Christie Golden released a novel based on the game story in 2001. The events of Lord of the Clans would be referred to in WarCraft III: Reign of Chaos (2002) and its expansion, The Frozen Throne (2003), as well as in that most obscure of online multiplayer games, World of WarCraft (2004).

Exactly how Lord of the Clans has leaked is unclear, and I'm certainly not telling you how to get it. The game is apparently 95% complete, with only a few synthesised voices hinting at where things have not been finished, and perfectly playable. Well, perfectly for a low-res, twenty-year-old adventure game.

It's also worth nothing that the game was created long, long before WarCraft III and World of WarCraft would establish the famous WarCraft aesthetic, and Lord of the Clans is strongly at variance with it in tone. But for a look at what could have been a very different path for Blizzard and WarCraft, it is quite interesting.
Posted by Adam Whitehead at 20:23