The world has been divided by the wild card virus: the unaffected, the deformed "jokers" and the super-powered "aces". All have their own agendas, some darker than others, but all are threatened by the arrival of the alien Swarm. As Earth comes under concerted attack by the creatures, several of Earth's own alien allies (such as Dr. Tachyon) help lead a defence. But destroying the Swarm Mother may be impossible as a cult of sympathisers leap to her defence... 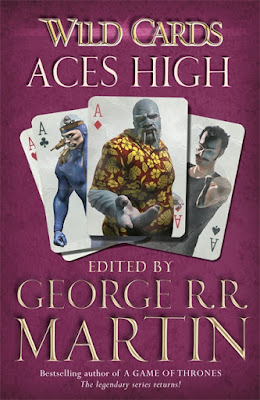 After the original Wild Cards focused on forty years of alternate history with the jokers and aces facing discrimination, political manipulation and questions over their loyalties, it's a bit of a tonal shift to follow that up with a full-scale alien invasion of Earth. Yet this kind of variety is what has kept the Wild Cards series fun and why it's still going thirty years after its creation. We know aliens exist in the setting - the wild card virus itself came from Takis - so it's fairly logical to see the aces and jokers joining forces to take on the menace.

There are of course complications. Unlike most superhero settings, Wild Cards doesn't hold much truck with big superteams. Aces tend to do their own thing, only joining forces when absolutely necessary. For most of its length, Aces High deals with several prominent aces and jokers (Tachyon, the Turtle, Jube the Walrus, Kid Dinosaur, Modular Man and Fortunato, with a few appearances by Croyd the Sleeper) tackling apparently unrelated issues relating to the Swarm and a Masonic cult before they realise how their individual threads link up, and there is the inevitable big showdown.


The stories that make up the book come from some of the bigger names in 1980s science fiction and fantasy: George R.R. Martin, Pat Cadigan, Walter Jon Williams, Melinda Snodgrass and Roger Zelazny are the big-hitters, but the rest are no slouches either. The stories vary from big, epic war stories as the Swarm invades in force to smaller-scaled tales of back-alley hustlings in Jokertown to things inbetween. They are all excellent, although it sometimes feels like you're only getting snapshots of the action. The Turtle gets a big, interesting storyline and then disappears off-page for a hundred-off page, during which time clearly some other stuff goes down, and suddenly he shows up for the big finale. 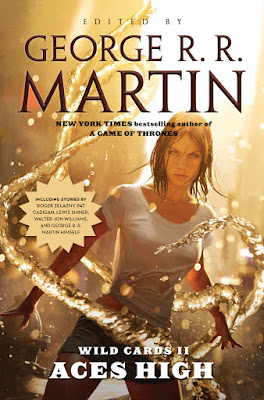 This is a recurring issue with these kind of shared worlds, the nagging sense that you are not getting the full story and having to infer that some big story-critical moments have taken place off-page. But it's not too distracting and is made up for the fact that each writer is clearly having immense fun creating and crafting their characters and taking their storylines forwards. The framing stories, "Jube" and "Unto the Sixth Generation", do a good job of keeping the larger over-arcing story on track.

The book builds to a big climax which is satisfying from an action and character perspective. But it's clear that although the aces have won a major victory over the Swarm Mother, they have neglected to account for her human minions. That's going to come back to bite them, quite hard, in the third book in the series.

Aces High (****) is a fine addition to the Wild Cards universe and a compelling follow-up to the original book. It is available now in the UK and USA.
Posted by Adam Whitehead at 12:48