Brave heroes are called forth to invade the nightmarish underground world and challenge the foul beasts and their dark keepers who are threatening to overrun the world. However, you are one of those keepers. Starting from humble beginnings with only a few imps to command, you must build an underground dungeon full of the finest training rooms, magical libraries, lairs and food sources. You must recruit an army of monstrous foes and then unleash them on rival keepers and heroes alike. You have to conquer and desecrate the world. It's good to be bad. 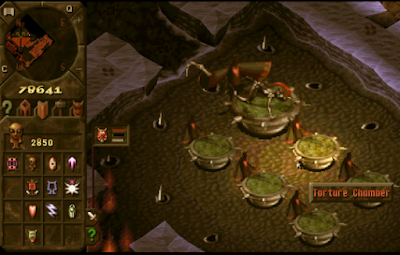 Dungeon Keeper was originally released in 1997 as by the legendary Bullfrog Studios. Over the course of a decade they released some of the finest video games ever made: Populous, Powermonger, Theme Park, Syndicate, Magic Carpet and Theme Hospital. Of those games, Dungeon Keeper holds a strong claim to being the best.

For a twenty-year-old game, Dungeon Keeper is surprisingly fresh and accessible. Bullfrog were one of the first game studios to pour a lot of time and thought into user interfaces, how to make controls as instinctive as possible. Although Dungeon Keeper has some odd quirks (you can't zoom with the mouse wheel, for example) its interface is mostly instinctive and easy to use even today. Do remember to hit Alt-R on starting a game to switch to high-resolution mode, otherwise controlling it can be a pain.

You start each level with a few imps, who are the workhorses of your dungeon. You can get them to tunnel out new rooms (you can decide how big they are, with the limitations of geography), claim new territory, strengthen walls, mine gold and generally act as gophers. As you build rooms, this attracts the attention of passing creatures, who arrive and set up home. They need a lair to live in, a hatchery to feed on, a training room to level up for combat and so on. Some creatures - like flies and orcs - are generalists who are mostly good for combat. Others have speciality skils: trolls can be put to work in the workshop churning out traps and obstacles. Warlocks and dragons are magical creatures who can research new spells in the library. Dark mistresses are canny warriors, but have to be kept "entertained" in the torture chamber. Vampires and skeletons are useful, but cannot be recruited: you have to bury enemy bodies in the graveyard and wait for them to rise, or starve them to death in the prison first. The game's tone is dark, but also extremely humourous with some very amusing sound effects and animations. 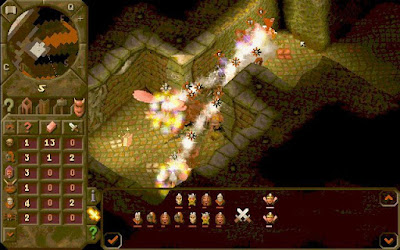 The game is interesting for its non-direct controls. You can give orders to creatures (mainly by picking them up and dropping them in the room you want them to work in, or near the enemies you want them to fight) but whether they obey or not is based on how happy you've kept them in their dungeon home, if you've given them enough time to eat and rest as well as training or doing stuff. Unhappy creatures will leave the dungeon, but happy ones will stay and level up, becoming tougher and more powerful. Your opponents - either rival keepers with their own armies or invading heroes from the surface - are often quite powerful so maintaining a balance between training creatures up to toughen them and having them work to improve your dungeon infrastructure is critical. The relatively limited number of creatures and tactics means that there isn't too much tedious micromanagement, however, and Dungeon Keeper is a surprisingly fast game. The very longest, toughest levels won't take more than an hour at the most.

As the game progresses, it introduces new features. Traps such as gas mines and Indiana Jones-style runaway giant balls can be great force-equalisers on levels with relatively few creatures to recruit. Infinite gemstone mines, which can generate a steady (but not rapid) stream of gold, can help prevent the need for dangerous over-expansion in early parts of the level. Bile demons and dragons are formidable creatures but need to be kept happy a bit more than most of your creatures. The escalation in difficulty is steady but not too onerous (if you want a real challenge try the Deeper Dungeons expansion included in most editions of the game, which will have you weeping in frustration).

The result is a compelling, enjoyable game that takes a fairly small number of assets, ideas and creatures and spins them into a gradually escalating challenge. The story and character elements are slight, but for sheer gameplay Dungeon Keeper is almost unbeatable. It's a rich and enjoyable experience that will make you think and laugh at the same time. Weaknesses? There isn't a huge amount of variety in the actual level design (one underground dungeon looks much like another) and, very occasionally, the game is a little obtuse in how it operates (letting you know you can blast enemies with spells in the combat summary panel as well as the map would have been quite handy).

Dungeon Keeper (*****) is a phenomenally playable game which has withstood the test of time brilliantly. It is available now, with the Deeper Dungeons expansion included, from GOG.
Posted by Adam Whitehead at 12:55

I played Dungeon Keeper 2 a number of years ago (it may or may not have been a licitly obtained copy, to my shame) and had a bit of fun before losing interest. Thanks for the write-up; maybe I'll visit GOG and check out the original.

Used to love the Bullfrog games and have fond memories of playing Theme Park and Theme Hospital as a youngster. I wish Dungeon Keeper had been ported to Playstation. I'd have eaten that up.