Murderbot is settling into their role providing security for their client Dr. Mensah on Preservation Station when they are asked to do something they've never done before: investigate a murder. Murderbot is more at home providing security in high-risk combat situations, rather than the finesse and subtlety that a homicide investigation requires. Still, with a potential killer or killers loose on the station and the inexperienced station security slow to find them, Murderbot takes up the case. 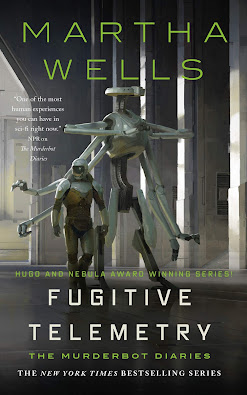 The sixth and (at this time of writing) most recent entry in The Murderbot Diaries returns to the novella format of the first four books, after the novel-length experiment of Network Effect. Fugitive Telemetry is set before Network Effect and sees a shift in format, with Murderbot going from security consultant to murder investigator, a task they initially seem ill-suited for but soon get to grips with. It's not a complete left-field transformation for the series - Murderbot has had to piece together mysteries and incomplete pictures before - but it's enough to freshen up the series when familiarity might be setting in.

As with the earlier books, the novella format means a tight, focused structure and an excellent pace (like the earlier books, you can easily finish this off in a single sitting). Wells writes the mystery with panache, providing enough misdirection to make it intriguing. However, she does not provide enough information for the reader to solve the mystery themselves until quite late in the day, which is a shame.

The twists and turns, brief action bursts and nice pacing make this as fiendishly readable as earlier books in the series, but arguably it's lighter on character than prior books in the series. Murderbot continues their development nicely, but there's a lack of a great foil for Murderbot like ART in prior books. Security Chief Indah has some promise, but they don't really get enough time in the sun to really fulfil the same kind of role. There's also some repetition in Murderbot, once again, having to prove its capability and volition to people keen to dismiss it as just another robot.

Fugitive Telemetry (****) is Martha Wells doing what she does best, delivering a witty, well-written slice of SF, this time more of a thriller than an action novel. The book is available now in the US and on import in most other territories. Three more Murderbot Diaries books are under contract, with the first anticipated for 2023 or 2024.