King Verence of Lancre has welcomed travellers from across the Disc to the naming of his daughter and heir. Amongst the visitors are Mightily Oats, of the Church of Om, and dignitaries from Uberwald who like their drinks glasses to be warm and filled with blood. This sounds like a case for the Lancre witches, but young Agnes is suffering from divided attention and Granny Weatherwax has gone to ground, prompting a search by Nanny Ogg. The undead have come to Lancre, and don't seem keen to leave... 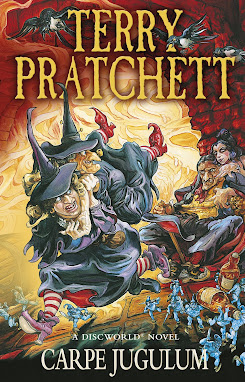 Carpe Jugulum, the twenty-third Discworld novel, returns to the Kingdom of Lancre and the adventures of the witches' coven led by Granny Weatherwax, one of the most popular sub-series within the larger series. It's a book that has a straightforward narrative, boiling down to vampires vs. witches, but also uses its straightforward story and structure to tell, in the best tradition of Pratchett, a more complex story about good, evil, morality and responsibility.
In the novel we meet "reformed" vampires. Through years of mental training against superstition and stereotypes, they've overcome many of the weaknesses of their kind. They've also trained themselves to "sip" from victims, keeping them alive for repeated use rather than killing lots of people. The vampires claim that this is progress, and they have overcome evil in pursuit of the common good, with the best results for both vampires and humans. However, it quickly becomes clear that this has just provided them with another form of control and oppression. The overt, cliche-ridden face of evil has instead been replaced by a bureaucratic, over-explained form of it, which feels even worse. The vampires beg the question, is slavery better than murder, and if so, does that still make slavery a good thing?
This leads to one of Pratchett's best encapsulations of the nature of evil and sin: people treating other people not as complex individuals worthy of respect, but as things, reducing them to statistics and not caring about their own volition; talking at people rather than with them. It's one of the Pratchett's most powerful arguments and it resonates through the novel as he explores it from different angles.
Pratchett is at his best when he is angry about something, as he was with fundamentalist religion in arguably his best novel, Small Gods (here echoed in the character of Oats, who is also a member of the Church of Om which was central in that book). His anger here is somewhat cooler, but he makes his point extremely well.
This overcomes a potential weakness of the book in terms of its basic plot and structure. "Vampires show up, take over Lancre, and get into a struggle with the witches and their allies," is extremely close to "Elves show up, take over Lancre, and get into a struggle with the witches and their allies," which we've already seen in Lords and Ladies. Although the specific plot points are different, the overall feeling of the novel is familiar. But still, if you can't tap yourself for ideas and inspiration, who else can you? And it helps that Pratchett uses a familiar structure to make an important thematic point about morality.
There's also some nice continuity moments in the book, like the first appearance of the Nac Mac Feegle in force (a solitary example appeared previously in Feet of Clay) who go on to play a major role in later books. The book is also quite amusing, with Pratchett satirising many elements of the horror genre, and the vampire genre specifically, without relying on the most obvious (and long-exhausted) gags. If there is another weakness, it's that the book dabbles with the idea of characters with split personalities, but doesn't engage with the idea as fully as perhaps it could.
Carpe Jugulum (****½) has a familiar and somewhat predictable structure, but Pratchett uses that to his advantage to relay a powerful message about the nature of good and evil, develop his characters (especially Granny Weatherwax) and trigger some good laughs along the way. The novel is available now in the UK and USA.
Thank you for reading The Wertzone. To help me provide better content, please consider contributing to my Patreon page and other funding methods.
Posted by Adam Whitehead at 09:42

Carpe Jugulum sits at sort of an awkward place. I've read it twice, and from the outside it looks like an S-tier Discworld story, but by the time I've finished I've sort of forgotten what it was about.

Over the course of these later Discworld books, like Carpe Jugulum and The Fifth Elephant, the themes grow gradually darker - a concept Pratchett hones to perfection in Night Watch, and then lets go stale in Thud! and Snuff.

But in the end, the universal Discworld laws apply: Coolness/cuteness determines the outcome of conflict, character relations never truly change, important characters never die or make meaningful sacrifices, and Granny/Vimes/Vetinari is a demigod who can do anything.