In a major article for Vanity Fair, the creatives at Lucasfilm have outlined their plans moving forwards for the Star Wars franchise. The franchise has had mixed fortune recently, scoring a major international hit with TV series The Mandalorian but also two box-office disappointments with Solo (2018) and The Rise of Skywalker (2019), and TV series The Book of Boba Fett which had a mixed reception. 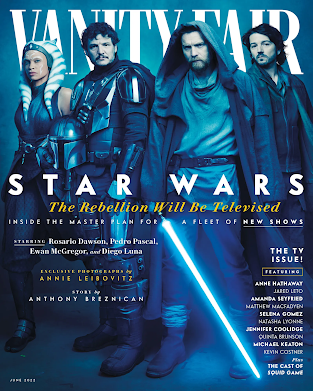 During the article, Lucasfilm confirm the release schedule for their upcoming TV shows, with Obi-Wan Kenobi launching on 27 May and Rogue One prequel show Andor hitting screens a few weeks later, before the end of summer. The Mandalorian Season 3 will arrive late this year or early next, with Ahsoka being a confirmed 2023 release. The Acolyte, a show set during the "High Republic" era about 100 years before The Phantom Menace, is likely to appear in 2023 or 2024.

Lucasfilm are also developing a new project, which so far only has the code name "Grammar Rodeo" (a Simpsons reference). The show sounds like Star Wars: Stranger Things, with a group of four children who get swept up in events following the fall of the Empire. The show is reported to have a "Amblin coming-of-age adventure" vibe from the 1980s. Director Jon Watts, who helmed the recent Spider-Man Homecoming trilogy, is in charge alongside writer Chris Ford.

In terms of feature films, it appears that the new focus is on Taika Waititi's Star Wars movie, which is in pre-production and will be Waititi's next project once Thor: Love & Thunder launches and he gets his commitments to that out of the way. That could potentially be a 2024 release. Patty Jenkins' Rogue Squadron movie was delayed a while back due to commitments to Wonder Woman 3 and Cleopatra, but Jenkins cleared Cleopatra by transferring it to another director. Rogue Squadron will be Jenkins' next film once the third Wonder Woman movie is done, possibly for 2025.

Marvel Cinematic Universe head honcho Kevin Feige agreed to brainstorm and produce a Star Wars movie a while back, but he's so busy with the MCU that that project has been back-burnered. Likewise on hold is Rian Johnson's Star Wars trilogy. Johnson has committed to his Knives Out franchise and a Netflix deal, which puts a Star Wars return a long way off. Left unspoken is the mixed critical reception to Johnson's film The Last Jedi, which may have discouraged his return to the franchise altogether.

The Knights of the Old Republic movie, rumoured heavily a couple of years ago, and the rumoured Lando Calrissian TV show, are also left completely unmentioned.

The article addresses potential issues with the Star Wars franchise moving forwards: most of the projects reiterate on eras and things we have seen before. Only The Acolyte seems to be set in a new time period distinct from the prior settings, and even that is apparently going to eventually be setting up The Phantom Menace (I suspect a Darth Plagueis appearance). The article also suggests that the failure of Solo has been blamed on recasting Han Solo rather than its release date or franchise fatigue. This has driven the decision to use CGI to resurrect classic characters rather than recasting, which I think is the wrong conclusion to draw from that. The "deepfake" technology is getting better all the time, but it's still not at the point where classic characters can be restored to the screen convincingly. Even if it could, it feels like that's feeding into the desire to keep Star Wars permanently stuck revisiting the same time periods, characters and concepts.

The mixed reception to Star Wars projects which have tried to go in new directions seems to have resulted in a lot of conservatism in these new projects, which is a shame. The problem with the sequel trilogy wasn't that it was trying to go in new directions, but that it starting off not doing that (with the highly retro and fan-servicing The Force Awakens), then did that only semi-successfully (in The Last Jedi, half of the best Star Wars movie bolted onto half of the most pointless) and then reversed course again and made a complete pig's ear out of the situation (in The Rise of Skywalker). A Star Wars project which did go in genuinely new directions with a coherent plan in place from the start and was genuinely well-written I think would have every chance of success.

"...half of the best Star Wars movie bolted onto half of the most pointless" is the most unique description of Episode VIII I've ever heard.

Didn't you do a review of The Last Jedi? I forget. That's something I'd love to read.