Harlan Ellison's THE LAST DANGEROUS VISIONS to be published in 2023

Harlan Ellison's The Last Dangerous Visions, one of the longest-gestating SF books in history, will finally hit shelves next year, fifty-one years after it was first announced. 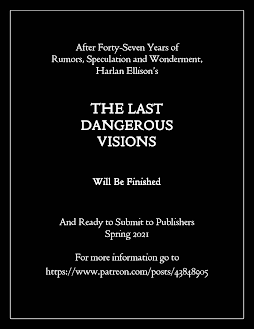 Ellison published Dangerous Visions, a seminal collection of short, groundbreaking SF stories from a mixture of the genre's biggest names and hottest newcomers, in 1967. It was rapturously received, selling a huge number of copies. Ellison followed it up with Again, Dangerous Visions in 1972. The Last Dangerous Visions was announced shortly thereafter, originally with a mooted 1973 publishing date. The book expanded, becoming more ambitious, and by 1979 Ellison was talking about publishing it in three volumes. Ellison claimed to be working on the project through the 1980s and 1990s, but at a certain point it became his white whale. Early memes about how the book would never come out proved popular, and author Christopher Priest even wrote a nonfiction book about the situation called The Book on the Edge of Forever.
Ellison's passing in 2018 would have seemed to have made the situation moot, but Ellison had asked his friend J. Michael Straczynski to work on bringing the project to fruition. That process has now been completed, with Blackstone Publishers picking up the rights to The Last Dangerous Visions as well as reprint rights for its two predecessors. They will issue the books as 2023 in individual volumes and a unified edition.
A full table of contents is forthcoming, although it is known that Cory Doctorow, Neil Gaiman and James S.A. Corey (aka Daniel Abraham and Ty Franck) have contributed stories. Other authors include Edward Bryant, Stephen Robinette, Max Brooks, DM Rowles, Dan Simmons, Cecil Castelluci, Stephen Dedman, Patton Oswalt, Jonathan Fast, Howard Fast, Robert Sheckley, and Adrian Tchaikovsky (and yes, the overwhelming maleness of the list has been noted, although the list is not exhaustive). The book will include a mixture of brand-new stories from contemporary authors like the above and some of the stories slated by Ellison for the book in the 1970s, as well as one story by Ellison that has not appeared before. The book will also incorporate artwork by Tim Kirk.
It will, of course, be impossible for any book to live up to fifty-one years of expectations, but it should be an interesting volume.
Posted by Adam Whitehead at 20:40

No Ada Palmer, Kameron Hurley, Arkady Martine, Charlie Jane Anders, N. K. Jemisin, Nnedi Okorafor or Ann Leckie on that list? More like "The Last Milquetoast Daydreams" if you ask me. Ten years ago, I would have called foul at bypassing so many significant female authors, but now I'm simply like, "Your request for obscurity has been duly granted, sir". Deeply confusing.

You do understand that this book was originally slated for a 1973 launch, right? In your chase for inclusivity you should make sure your opinions are informed, as Ellison would say. Fortunately, his legacy is secure and his work will be read long after those names fall out of fashion.

Obscurity? Several of the authors mentioned have outsold the all the ones on your list combined. Most of the rest have higher sales heads up. Im not disparaging your authors, but obscurity is definitely the wrong word.

Most of the names from the list are from the modern intake, not the original 1970s list (we still don't have a full table of contents, but with the book being relatively short there's probably not a huge amount more room).

Thad's list reflects modern, award-winning SFF authors with a high profile. Straczynski notes that he did ask several of them to participate, but the deadlines they were working with were very tight, and they turned him down for time reasons or did not respond.

We should also acknowledge the fact that Ellison's name and reputation has always been off-putting to some people (going right back to his heyday, as he often celebrated), even moreso after his later years, so it's unsurprising that some writers declined to take part.

> the overwhelming maleness of the list has been noted

As far as I know, they have been published elsewhere, as have many others, see:

I own both DV collections, and it's interesting to note that the ratio of female to male authors improved from the first collection to the second. The first DV had 33 stories, of which only 3 were by female authors. I had never heard of any of the women whose work was included, but the stories were strong ones. That's 1 female author for every 11 men--not good.
A,DV had 48 stories (and I do think it was unfair that 3 of the authors were allowed multiple stories), of which 8 were by women (counting James Tiptree, Jr., whose secret was still safer than Fort Knox at the time)...and this time, along with a couple of first-timers, there were some definite Big Names, and their stories were worthy ones indeed. (I still giggle when I read Ellison's prediction that "[Kate] Wilhelm is the woman to beat [for the awards in 1972], but Tiptree is the man.") The ratio here is far better--1 out of 6.
But TLDV, which was slated to contain at least 31 stories (this is from Ellison's "plug" for the book in the Introduction to A,DV), had only four women on its preliminary list as of Ellison's intro (McCaffrey, Butler, Doris Pitkin Buck, and Vonda McIntyre). Mr. Seabrook adds three more authors of which I was unaware, in which case the total number of female writers for TLDV would have been 7, with the total number of stories being 34.
So, as you can see, the ratio of female to male authors in TLDV--assuming it had been released on schedule, nobody had withdrawn a story, and Ellison hadn't added any more stories at the last minute--would have been a little better than 1 out of 5.
And let's not forget that by the time A,DV came out, Ellison's little franchise was no longer the only game in town. There were a handful of original anthologies giving the new kids a chance, and as Ellison pointed out, those who were not accepted for the DV books had other outlets to try.
Thanks for letting me put my nickel in (inflation, right?).