Bethesda Game Studios have announced they are delaying their new science fiction roleplaying game, Starfield, to the first half of 2023. They had previously committed a release date of 11 November this year. 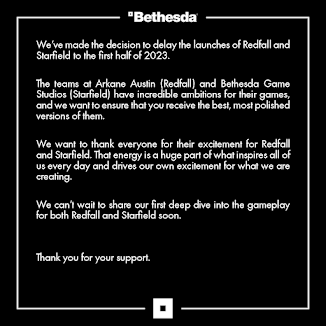 Starfield is the latest open-world CRPG from Bethesda Game Studios, best-known for their Elder Scrolls and Fallout games. Starfield is a brand new IP, set in the early 24th Century and seeing the player working for Constellation, the last human organisation dedicated to interstellar exploration. During the game the player becomes embroiled in a central mystery, possibly related to the discovery of alien life, and has to choose which one of several factions to work with. As usual with a Bethesda RPG, there will be significant freedom in allowing players to choose where they go and what to do next.

Starfield is also the first game to use the new generation of Bethesda's Creation Engine to create larger and more impressive environments than previously, as well as featuring new mechanics. The same engine is also being used for The Elder Scrolls VI, the long-awaited sequel to Skyrim, which is now in pre-production.

Redfall, a co-op action game from fellow subsidiary Arkane Studios, has also been delayed in the same time window.

Bethesda announced the 11-11-22 release date in June 2021, and reportedly it was already considered ambitious. However, Bethesda have always been aggressive in announcing release dates, announcing both Fallout 4 and Fallout 76 just six months before release, and Skyrim around a year. The eighteen month lead-time seemed reasonable on that basis. However, Bethesda have confirmed that the technical challenges of getting the game ready in time have proven greater than expected. Aware of the controversies of other games that were not ready and then rushed out in a buggy state (such as Cyberpunk 2077), Bethesda have chosen a more cautious approach.

Starfield's precise launch date in early 2023 has not yet been confirmed. More information on the game is expected to be revealed at the Xbox Game Showcase on 12 June.

Maybe they can use this time to work on Elder Scrolls 6 instead? How they have not put out a sequel to one of the highest selling, most popular games of all time is beyond me.