Admiral Picard joins the crew of the brand-new USS Stargazer when a strange signal heralds the arrival of the new Borg Queen. A tense stand-off with Starfleet results in hostilities...and the changing of the timeline. Picard discovers the involvement of his old sparring partner Q, and embarks on a journey into the distant past to reset the timeline and find out what is going on. 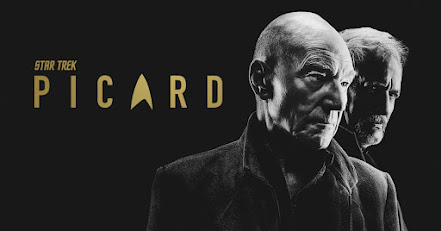 The first season of Picard was highly reminiscent of the first two seasons of its label-mate Star Trek: Discovery: a highly promising start, a great cast, some solid opening episodes and lots of good ideas which were slowly compressed through the meatgrinder of confused writing, questionable attention to detail and sloppy pacing until the whole thing kind of fell over at the end in a confused mess. The most recent season of Discovery managed to just about avoid this fate and there were hopes that Picard's sophomore season might follow suit and deliver a more coherent and consistent experience.

The show certainly tries. The opening episode sees some great shots of numerous Federation starships of different types (addressing the complaint of the first season Picard finale which had a whole fleet of cloned ships) and some fun times on the brand-new Stargazer, a successor to the ship that Picard commanded before the Enterprise-D. The way the crew from Season 1 is reassembled is a little contrived, but that's been an issue with Star Trek for a long time (I remember the various stretches they had to do to get Worf involved with the TNG movies when he was also supposed to be a regular on Deep Space Nine). The show does put together its mystery for the season with some skill, resulting in a pretty strong opening episode.

However, by a few episodes in the show is starting to creak under the weight of what feels like an overload of too many ideas. Shoehorning the Borg, Guinan and Q into a Voyage Home-influenced time jump to the same time period as a Deep Space Nine episode already feels unwieldy, which is even before an ancestor of Dr. Soong shows up (so Brent Spiner can have something to do). The show also feels somewhat unkind to its own first season cast: Isa Briones and Evan Evagora are reduced to barely having cameos and the season ends with several more characters being written out.

The show does service other characters better. Santiago Cabrera has a lot more to do as Chris Rios and his storyline has a bit more emotional weight to it than others. Alison Pill and Annie Wersching also have a nice two-hander relationship going on as Jurati has to work with the Borg Queen for most of the season, and Jurati gets more development than she ever did in the first season. Seven (Jeri Ryan) and Raffi (Michelle Hurd) also get a bit more time in the sun.

For the other castmembers, it's great to see Orla Brady (a highlight of the first season) having a lot more to do this time around, but Patrick Stewart feels ill-serviced. The first season, for all its problems, gave Picard a believable reason for emotional turmoil and regret. The second season advances the idea that he is lonely and regretting the fact that he never got married or had a family, which is fine as far as it goes (although it seems to go against the Star Trek ethos of people also finding happiness and fulfilment in non-standard living arrangements), but it never really seems to find a way of marrying that to what's actually going on in the plot, some mumblings about legacy and an ancestor in 21st Century LA aside. The major retconning of his family history over what was established on TNG is also decidedly sloppy. It's also a shame he has such little material with a returning and on-fine-form John de Lancie as Q, especially given how hard their reunion was pushed in the marketing.

The season is also stretched at 10 episodes and would have been better-served as a pacier 6-episode mini-series. Although the show never dips as much into filler as the first season did, there's the definite feeling of wheel-spinning in side-stories that don't add much to the central narrative.

Against that there's some very good visual effects, some of the character arcs are decent and there's a promising story lurking around here. The second season of Star Trek: Picard (***½) is watchable and, at times, genuinely fun with a great cast, but it also overstays its welcome, doesn't seem entirely sure what story it wants to tell and sometimes over-relies on fanservice in favour of compelling storylines. The season is available now on Paramount+ in the United States and on Amazon Prime Video in most of the rest of the world.