St. Louis, 1857. Abner Marsh is the owner of the Fevre River Packet Company, running several steamboats up and down the upper Mississippi and its tributaries. But, during a particularly harsh winter, he loses all but one of his ships. In some financial difficulties, he encounters an unexpected saviour when a European, Joshua York, offers to bail him out and fund the construction of a grand new steamboat. Marsh's career and company is saved, and he is soon the captain of the Fevre Dream, the greatest side-wheeler to ever run the river. The ship begins its maiden voyage to New Orleans, but as the ship travels south, rumours begin to circulate about the unusual Mr. York, who takes his meals at midnight and sleeps through the day, and who takes a strange interest in the reports of unexplained deaths along the river banks. 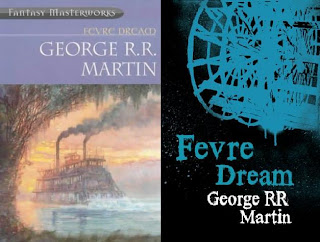 UK Fantasy Masterworks covers, 2001 and 2008 editions
Meanwhile, in New Orleans a man named Sour Billy Tipton recruits slaves for his employer, a mysterious recluse named Damon Julian, who lives in an old, crumbling estate on a bayou south of the city. Julian has an odd reputation and people mutter about all the slaves who go onto his estate but never leave. It becomes clear that, to their 'people', Julian is a constant, ancient and immovable force, and York is a new saviour, come with a promise of liberation and freedom. Only one of them can prevail. But in this clash what will be the fate of the Fevre Dream, its crew and its captain?

Fevre Dream was originally published in 1982 and was a big hit for its author. It sold very well and attracted a great deal of praise, even a cover quote from the hard-to-please Harlan Ellison. The novel is a hybrid of Heart of Darkness, The Adventures of Huckleberry Finn and the complete works of Byron, welded to Martin's gripping storytelling abilities, here at the height of their powers. In terms of completed works, it is GRRM's finest novel published to date (although in terms of incomplete ones, A Storm of Swords may be slightly stronger).

The genre here is horror, mixed in with a strong historical flavouring. The atmosphere of the novel is vivid and extremely rich, and after a few pages of reading about the steamboats on the Mississippi you'll be swatting aside imaginary flies and thinking about opening a window. GRRM strikes an impressive balance between the romantic vision and the harsh reality of a historical period here, as he does with 1960s bands in The Armageddon Rag and with medieval warfare in A Song of Ice and Fire. Yes, the steamboats on the river at dusk are a stirring and evocative sight, but there's also the slave trade and the dirty riverside towns where crime runs amok and the slowly building tensions that will explode in civil war just a few years later, all of which is well-depicted. 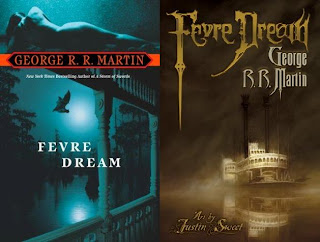 US mass-market edition from Bantam and limited edition from Subterrenean Press
GRRM is widely-regarded for his characterisation and here it is no different. From the bluff, fat and straightforward Abner Marsh to the driven, passionate Joshua York to the weaselly Billy Tipton (who may be GRRM's most pitiably hateful character ever) and the horrifyingly empty Damon Julian, he has populated this book with characters who stay with you long after the final page is turned. The plot is page-turningly compulsive and the pace furious, but still with enough pauses for breath to let the atmosphere sink in. And, as a horror story, it is genuinely horrific. No punches are pulled, there are no cop-outs and what victories there are come at a terrible price.

That said, like Huck Finn travelling downriver with Jim, Fevre Dream has at its core the notion of friendship and what lengths people will go to help one another, and this is worked through the narrative in a masterful manner culminating in a final chapter which may be GRRM's finest piece of writing to date.

Fevre Dream (*****) is a book I curse, for it has destroyed almost all other vampire fiction for me. Very little of it stands up to this volume (Ultraviolet, maybe Buffy before every other vampire on the show started getting a soul and going Twilight on us). But the price is worth it. This is a magnificent novel. It is available now in the UK from Gollancz (the current edition has a disappointingly bland new cover, but thankfully the superb one which previously adorned it is still in print) and in the USA from Bantam and also as a limited edition from Subterrenean Press, attractively illustrated by Justin Sweet.
Posted by Adam Whitehead at 22:22

Added this to my wish list on Amazon yesterday after seeing it mentioned at sffworld.com . Cannot wait to read it.

First of all I'm not a big fan of vampire stories. But last year I read Fevre Dream and I didn't regret.
I really liked your excellent review, especially the last paragraph!!
You're so right.

A very fine piece of vampire fiction indeed, and hands down my favourite of all those I've read. It's been a while since I read the book, four years at least, and I can't recall much of the story, but his words and descriptions contain such power of evocation that I I still have very vivid memories of the atmosphere he conjures, something generally only films can achieve. Paradoxically Martin is often overlooked as a writer ; A Song of Ice and Fire is so overwhelming in terms of plot and realism (I mean this in a good sense) that the person tends to hide in the background, letting the story unfold as if being witnessed directly. More often than not and whatever voice employed, the writer as narrator is always present - not a case here. Truly an outstanding feat. Had I not read Fevre Dream, I'm not sure I would have bought Dreamsongs.

just read this and must say that, while dying of the light and windhaven didn't grab me, this is where george's brilliance starts to show. the chapter in which joshua tells abner his story is amazing. i never knew how exciting a steamboat race could be!

this thing has feature film written all over it. cast john goodman as abner, and reprising their roles from interview with the vampire, have brad pitt be the good vampire (joshua) and tom cruise be the evil vampire (damon). i can definitely see it being a critical and financial success.