Wertzone Classics: The Lions of Al-Rassan by Guy Gavriel Kay

Al-Rassan was the stronghold of the western Asharite faith until Ammar ibn Khairan killed the last khalif, splintering the land into feuding city-states. In the north the Jaddite kingdom of Esperana similarly splintered into three smaller nations, each harbouring a desire to conquer the others and unify the entire peninsular in the worship of the sun-god. King Ramiro of Valledo appears to be the most likely to succeed, due to the skills of his infamous general Rodrigo Belmonte and his elite company of soldiers. Political intrigue and expediency soon see both Rodrigo and Ammar exiled to Ragosa, the beautiful Asharite city by the lake, where their destinies become entwined with that of Jehane, a Kindath physician, and where the fate of Al-Rassan and Esperana will be decided. 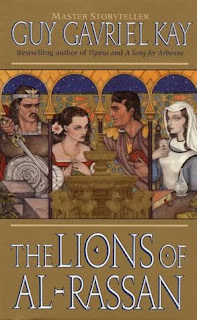 When it comes to epic fantasy, Guy Gavriel Kay is one of the more interesting writers around. For someone toiling in the genre of vast armies and immense battles, the depiction of war and combat seems to mildly bore him. That's not to say that Kay can't handle those elements, but he is far more interested in his characters, in their motivations and what role they play in the political world around them. A possible weakness of Kay's work is that his fascination with his character's internal struggles sometimes displaces his interest in the wider plot (as in The Sarantine Mosaic, the languid pace of which detracts from a strong central premise), but in his strongest works - this book, Tigana and A Song for Arbonne - he combines this element with a mastery of storytelling to produce something truly compelling.

This is the story of El Cid and the Reconquista of Spain given a thorough make-over, with historical elements mixing with original material throughout. On one level, Kay's light remixing of history occasionally makes the reader wonder what the point of 'fantasising' the story was in the first place. It's pretty clear throughout that the Kindath are the Jews, the Asharites are Muslims and the Jaddites are Christians (even though their individual belief systems are very different to the 'real' religions, everything else is practically identical, down to their naming conventions). In fact, one of the reasons for the delay of the long-gestating movie version of the novel appears to be writer and director uncertainty whether the film should reflect the book or be set in 'proper' Al-Andalus. However, these factors do allow Kay to tell his own story, using history where he wants but retaining the freedom to create his own material elsewhere. Most notably, he manages to compress the latter four centuries of the Reconquista into a much smaller period of time to better suit the action. The result is a story which feels familiar and new at the same time. 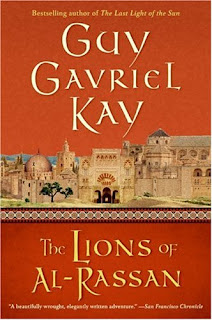 The book studies several themes and ideas: faith and tolerance, friendship and love, family and camaraderie, war and idealism. Kay illuminates these ideas through his characters, and whilst Kay has always been a gifted creator of fascinating protagonists, arguably he has never bettered the cast of this book: Ammar and Rodrigo, whose rivalry and friendship forms the core of the novel; the gifted physician Jehane; the imprudent soldier Alvar; even minor characters like the merchant Husari and the outlaw Tarif, all seem to leap off the page as fully-formed individuals, whose actions and reactions will determine the fate of the peninsular. Events culminate in the book's inevitable final showdown, and whilst some readers may find the skipping of much of the war and the major battles to focus on one key event in particular to be a bit of a cop-out, those familiar with Kay will recognise that for him, war is nothing to be glorified in its depiction, but only to be used as an event to mould his characters and reflect on them, and in that endeavour he succeeds impressively.

The Lions of Al-Rassan (*****) is a book that has improved since I first read it thirteen years ago. Thoughtful but never boring, dramatic but never over-the-top, it is a beautifully-written and thought-provoking novel from one of fantasy's more underrated authors. The novel is shamefully out-of-print in the UK, but the Voyager paperback edition can still be found on Amazon. The US edition is published by Eos.
Posted by Adam Whitehead at 20:55

This book is definitely a keeper, something I would like to call an all-time classic. I read it several times over many years, and it always managed to captivate me. Unfortunately, I think that Kay lost the special flavor of his early novels. "Last Light of the Sun" could simply not compete with Sailing to Sarantium or the Lions.

I also like the german cover a lot, Heyne often picked rather unfitting cover art, but this one is very nice, even better than the original. It shows Ammar, Rodrigo and Jehane:

Probably my favorite Kay novel. No one is quite as good at breaking my heart than Guy Gavriel Kay.

I actually rate Last Light a fair bit. It's Kay being a bit derivative of Kay (which I suppose is allowed), but readable and still interesting. I think Kay probably decided he'd used the same idea too often, which is why he did the contemporary fantasy thing with Ysabel, although given that Ysabel wasn't received too well either, that didn't work out too well.

Interested to see what his next book is about, whether it's another historical fantasy or something else.

I liked Last Light, but I'm a sucker for Vikings and biased. :)

Hi Adam, is The Lions of Al-Rassan a Trilogy? Is it about "religion's war" or sumthing?

@The Annaqi: no, it's a stand-alone novel, and yes, it's about a religous war; the only two Kay's books I'm aware off to be mutually connected by the same story are "Sailing to Sarantium" and "Lord of Emperors", which build together so-called "Sarantine Mosiac".
However, "Lions", "Last Light" and the two books mentioned above all share the same world.

Most of GGK's books are standalone, but his first books were a trilogy: The Fionavar Tapestry, comprising The Summer Tree, The Wandering Fire, and The Darkest Road.

Tigana's still my far-and-away favorite, though partly because of my background with the book. Shane said...
/No one is quite as good at breaking my heart than Guy Gavriel Kay./
That about says it all.