Picking up where I left off before, we returned from the signing to the hostel to freshen up before heading to McHughes, the pub where the party was to be held. Despite a slight signage hiccup ("GRRF AND FRIENDS") it was great. We got the large basement bar to ourselves, which comfortably fitted the 60-70+ people who showed up. 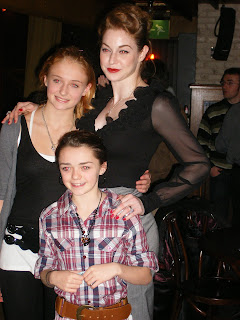 Esme Bianco poses with Sophie Turner and Maisie Williams.
The attendance was similar to that at the signing: we lost Kit and Alfie, who were too worn out by filming, but gained Esme Bianco, who plays 'Ros', a lady of negotiable affection in King's Landing. Esme did some autographs and photos for fans eager to 'get the full set' and explained her role in the series to some book fans who hadn't been keeping up to date on the casting news. I think we settled on the idea being to give Tyrion a 'more HBO introduction' than he had in the books.

An American fan from Kentucky who'd been visiting Ireland took advantage of the occasion to propose to his girlfriend (she said yes), and they promptly were congratulated by GRRM and the castmembers, which was very cool.

I spent some time talking to Maisie and Sophie's parents, who were almost as enthusiastic and excited about the show as their daughters. They'd attended the cast read-through and reported that the rest of the actors are all terrific as well, taking time to especially praise Tamzin Merchant as Daenerys who obviously has a very challenging role but did a great job at the read-through. 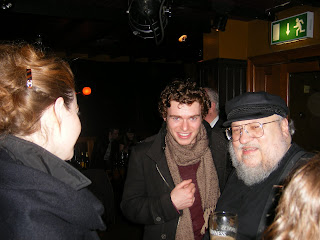 George talking to the fans and actors.
George worked the room, sitting with each table of fans in turn, talking to everyone and discussing the books, the TV show and his other projects. He confirmed that ADWD is now well over 1100 pages long in manuscript and more is required. He didn't want to give out any dates, but indicated he didn't see the book getting as long as ASoS (almost 1600 MS pages). He also indicated that getting events to happen at the right time and in the right order to make sense compared to AFFC and the following books is part of the 'Meereenese Knot' problem, but he is working away at it. Someone asked if his blog post about his sword bouncing off the knot and cutting his nose off was a reference to Tyrion and he laughed and said that fans read way too much into every little thing he says.

It may be worth bearing that in mind during the next bit of news: at one point, whilst talking to everyone from the stage bit at the front of the pub, GRRM said the show was not greenlit yet, it's just a pilot and a lot of pilots don't make it to series, but he also said that HBO might give them a one-season order or maybe even a two-season order. He also expects to hear about the series by March. Whether that's HBO saying they'll make the decision in March or that's merely the latest time they'll decide (I was thinking January myself, based on some recent pick-ups they have given, but obviously GRRM is far better-informed) wasn't clear, but that was the first indication of a timescale involved. 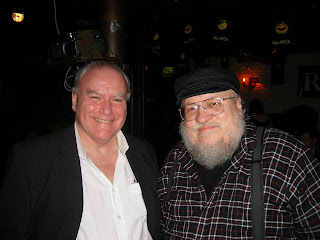 Ron and George.
The actors were great, continuing to sign books for people who'd missed the signing earlier that day and chatting to people. Ron Donachie turned out to be a fan of the New York Jets which GRRM was taken aback by (American football has a following in the UK, but not a very large one) before promptly jumping into a detailed American football discussion with Ron. 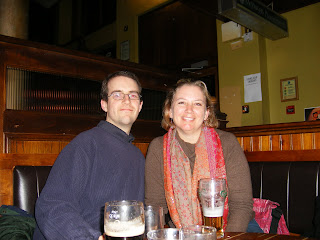 Myself and the very cool Julia Frey.
The actors had a 5am call the next day, so left reasonably early. Because it had been a fairly early start to the meet, we were left in the highly unusual state (for the BwB anyway) of everyone deflating at around 10pm. Luckily, we were buoyed up by the arrival of Julia Frey, who is an effects supervisor on the project. Julia had (somewhat briefly and quickly edited) blogged about some very early work on the show, bringing her to the attention of the fans of Winter is Coming and Westeros.org, but she was diplomatically circumspect on her current work on the show (seriously, she has a terrific poker face). Eventually we gave up trying to get intel on the show and ended up listening to Julia's great stories about working on Alien 3 and other projects. Very cool stuff. She also has a funny website on safety graphics here.

And then it was time for everyone to go home. It was an excellent trip, some new friends were met and made, the cast were universally excellent and the buzz about the production was palpable. Nothing is set in stone and the series may not yet be commissioned, but I am firmly convinced that the the series is in great hands. More pics can be seen here.
Posted by Adam Whitehead at 19:46

Email ThisBlogThis!Share to TwitterShare to FacebookShare to Pinterest
Labels: a game of thrones (TV series), a song of ice and fire, hbo

Seriously, from the moment I heard that HBO was considering turning Martin's tale into a television series, I knew it would rock! It will. Forget Oz. Forget Deadwood. Forget Rome. Forget the Sopranos. *Uses Dave Chapelle voice* Winter is coming, bitches.

Funny seeing Sophie Turner and Maisie Williams hugging on Esmé Blanco. After hearing how polite they all were, I can imagine how parts of the introductory conversation went:

"Who do you play again?"

And I'm on-record as having said Tamzin Merchant will be amazing. Glad the cast sees it too!