Decades ago the forces of Chaos overran and conquered the Sabbat Worlds, a star cluster of over one hundred inhabited planets which had been won for the Imperium six millennia previously by Saint Sabbat, a formidable general. One of the few worlds not to fall outright was Aexe Cardinal, too marginal for even the endless legions of the Warp to waste time attacking. Instead, a local, ambitious nation was reinforced and induced to attack its neighbours, unleashing a horrendous trench war the likes of which humanity has not seen in thousands of years. 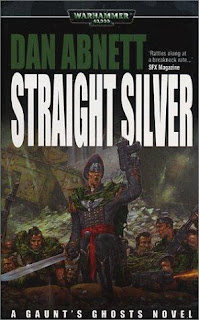 With the Crusade forces now trying to push back a determined Chaos counter-assault, several detachments of Imperial Guard have been dispatched to secure Aexe Cardinal and its resources. Gaunt and the Tanith 1st are sent in to break the stalemate. Unfortunately for Gaunt, he remains unaware that his unit is harbouring a traitor and murderer...

The Gaunt's Ghosts series reaches its sixth volume and shows little sign of running out of speed. Just as we were getting used to the 'rules' of this series, Abnett decided to shake them up in the last two books by introducing some bad apples to the Ghosts and killing off one reasonably major character, as well as varying the war scenes by switching to an airborne drop in The Guns of Tanith and a running road battle in Honour Guard. In Straight Silver he switches to a gruelling trench war reminiscent of WWI with the two sides happy to lob shells at one another and occasionally try a futile trench-rush. By invoking images of the Somme and Passchendaele Abnett does a good job of getting across the horrendous futility of pointless war, with even the battle-weary Ghosts shocked by the state of the conflict and determined to help break the deadlock.

This leads to a two-pronged storyline, as one detachment of Ghosts scouts a forest for signs of enemy infiltration and ends up besieged in a farmhouse whilst another goes on a Dirty Dozen-style trip behind enemy lines to locate and destroy an artillery detachment. It has to be said that compared to the epic, conflict-ending struggles the Tanith has been involved with previously, these feel like sideshows, but this is deliberate. The Tanith aren't always the unit that turns the tide of a war, and after forty years of conflict such an outcome would have been particularly unrealistic here. Instead, Abnett focuses on the characterisation, particularly of the increasingly loathsome Cuu and his feud with the Ghosts' ace sniper Larkin. Whilst also developing the newer Varghast troops he also switches the spotlight on some older Ghosts who have not featured centrally in the past, such as Feygor and Mkvenner, to good effect.

The end of the book is a surprise. The Ghosts are abruptly summoned on a new mission and we are left on a minor cliffhanger, for the first time in the series. The Ghosts have a new mission, one potentially that could win them the entire Crusade, on Herodor...

Straight Silver (****) is another solidly entertaining instalment in a reliably entertaining series. It is available now in the UK and USA as part of The Saint omnibus.
Posted by Adam Whitehead at 19:13

thanks for the review but don't reveal the ending :O