The 26th Century. Humanity has gained access to the stars thanks to the Shoal, the only race in the Galaxy to have developed a transluminal drive. Humanity leases space on the great Shoal coreships as they make a circuit of inhabited systems in the Orion Spiral Arm. The Shoal guard the secrets of FTL jealously and even murderously, so when a human colony discovers an ancient alien derelict in the Nova Arctis system, apparently with a still-functional FTL drive, the colonists make the decision to secretly extract and replicate the drive for themselves. 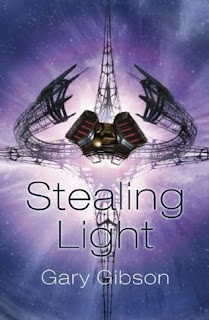 However, the alien ship is guarded by ancient software protocols and defence systems that ordinary humans cannot overcome. To this end, Dakota Merrick (a 'machine-head' with illegal brain implants) and Lucas Corso (an expert in computer language) are drafted in to help with the retrieval operation. Needless to say, the operation does not go as planned, for both the Shoal and their enemies are one step ahead of the game...

Stealing Light is the opening novel in The Shoal Sequence, a space opera trilogy which is - hooray! - now complete (the later volumes are Nova War and Empire of Light). It is a fast-paced, fiendishly readable SF novel built on an intriguing premise (one alien race in the Galaxy controls FTL and rations it to its vassal species very grudgingly) which is then expanded and explored in a very logical fashion (the FTL drive has some intriguing side-effects which the Shoal don't want other races to find out about) and delivered through some effective action set-pieces and some solid character-building, with Dakota Merrick being a fine SF heroine, albeit a hugely flawed one. Dakota is haunted by events in her past, some of which she is using to excuse her dubious actions in the present through some questionable rationalisations, which makes her a sympathetic character only up to the point you realise she's avoiding taking full responsibility for her actions, at which point she becomes more interesting.

One thing that Stealing Light is not is original. In fact, the book is positively magpie-like in its picking of concepts and ideas from other works. The Shoal-vassal relationship recalls David Brin's Uplift books, whilst the recovery of an alien derelict harbouring major plot revelations has been done to death. The subversion of cybernetic technology via virulent computer viruses that can snatch away a person's violition has also been handled to some degree by Alastair Reynolds in his Revelation Space books, whilst the book's central doomsday macguffin is something that will be very familiar to Peter F. Hamilton fans. To those well-versed in space opera, this might be slightly irritating, but generally I found the book's pace, verve and page-turning energy (not to mention a fine line in dark humour) to more than make up for these originality shortcomings.

One area which could have been handled better is the depiction of the alien races. The Shoal (an aquatic species of sentient fish who float around is giant, suspended fields of water) are pretty human in thought and deed and rather unconvincing as alien beings, although the splendidly-named Trader-in-Faecal-Matter-of-Animals is a complex and intriguing antagonist. In terms of structure the book is also a little repetitive, with Dakota and Corso spending most of the book being captured, escaping, making desperate deals, being captured, escaping again and so on like a mid-1970s Doctor Who serial. Gibson just about manages to avoid it being a major issue, but the characters lacking the ability to affect the plot themselves and being at the mercy of various outside forces until the endgame of the book gets a little wearying after a while.

Stealing Light (****) is a well-paced, fun space opera novel and a solid opening to a promising trilogy. The novel is available now in the UK and on import in the USA.
Posted by Adam Whitehead at 20:32

Sounds really good. I am trying my hand with some new SciFi (syfy?) and may have to add this one to my wishlist.

"the recovery of an alien derelict harbouring major plot revelations has been done to death."

First, yay for the "ou"! Us Yanks tend to leave those out. Now, as to this being "done to death" I'm not sure I agree. Sure this may have been done a lot but if done well it is a plot device I've yet to get tired of. Maybe it is something specific to some who has always been more of a fantasy reader (and D&D gamer) that somehow equate "derelict space ship" to dangerous dungeon. Regardless, I love alien (or even ancient human, like from Diving into the Wreck) derelicts.