Paul Kearney recently sent me a couple of interesting illustrations related to his Monarchies of God series, republished last year by Solaris in two omnibus editions. The first is the Spanish cover of The Iron Wars, the third book in the series, and the other is an image by Paul himself depicting Corfe Cear-Inaf, the hero of the series (or the closet thing we have to one). 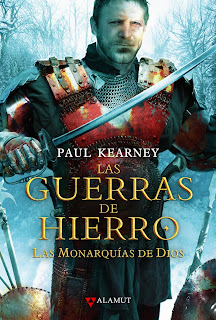 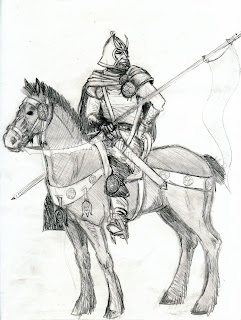 What's more impressive is that the latter illustration was made by Paul when he was just 14, and was the inspiration for Corfe and his elite cavalry formation, the Cathedrallers, who defend the Kingdom of Torunna from the invading Merduks.

Remember to check out Hawkwood and the Kings and Century of the Soldier if you haven't already. Kearney's next book, Kings of Morning, the finale to the Macht trilogy, will be published in November.
Posted by Adam Whitehead at 00:05

Awesome. Just... awesome. I'm 27 and I'm still on stick figures. And to think all of The Monarchies of God was sprung from this dear little doodle!

Thanks for sharing, Paul.