Sareth, a young hero on the planet of Ashan, is thrust into a struggle between several competing factions for a mighty artifact, the Skull of Shadows, his use of which could determine the fate of the world. Arantir, a dread necromancer, wants to use the Skull to help him rule the world, whilst another faction favours destroying it or using it to re-imprison an ancient force of implacable evil. The choice is in Sareth's hands... 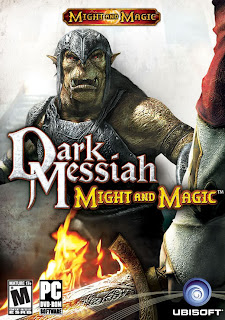 It's difficult to pin down exactly what kind of game Dark Messiah of Might and Magic is. It has an inventory system and you gain skill points as the game progresses, which you can use to increase your effectiveness at combat, magic or stealth. It has a main storyline, but also a couple of optional side-missions at various points. Yet it isn't really an RPG. The game is thoroughly action-based, there are a few cut-scenes and very little in the way of hub or open areas where you can do jobs on your own. So it's more of a hybrid RPG and FPS.

The game uses the Source Engine, previously used to power Half-Life 2 (and, since then, games like the Left 4 Dead and Portal series), and like Half-Life 2 the game is based around a gimmick. In Half-Life 2, you had a gravity gun which you could use to, for example, pick up a tumble driver and fire it at velocity into enemies' faces. It was a fun gimmick, especially since if you tired of it, you could ignore it and continue to use guns.

Dark Messiah of Might and Magic also has a gimmick. It's called 'your foot'. Essentially you can use 'your foot' to 'kick' enemies, often into handily-placed fires or walls of spikes (which are, inexplicably, legion in the game, even in ordinary people's houses) or off ledges. Unlike Half-Life 2, this gimmick is not optional. Kicking an enemy is sometimes the difference between a fight lasting five seconds or ten minutes.

Combat in Dark Messiah is hard, frustrating and annoying at anything over the lowest difficulty rating. You tend to die if you take three hits from the enemy, whilst they keep coming after sustaining dozens of blows, even small goblins. Keeping your shield up (or sword in parry mode) and knowing when to riposte blows is vital to ensure victory. That is, if you refuse to kick them to death using the omnipresent environmental hazards. Once you've gotten used to the oddities of combat, however, the game becomes far more enjoyable.

Level design is frequently ingenious, overcoming the Source Engine's frustrating 'load every ten steps' feature by making maximum use of vertical space, with ascending or descending house floors and tower levels (often with a handy empty middle bit you can kick people down) being intelligently used to ensure maximum carnage with minimal loading. There's also huge spaces with clever ways of traversing them, sometimes recalling the Jedi Knight series, and intermittently the Prince of Persia games (particularly your character's ability to grab onto levels and haul yourself up, which is very weird in the first-person viewpoint). Graphically, the game is reasonable, though both character models and particularly animation are a bit weak compared to the two-years-older Half-Life 2. Environmental graphics and particularly lighting remain strong, however.

The storyline is fairly weak and predictable, and your NPC helper for most of the game is pretty useless (she's no Alyx Vance, that's for sure). Also, despite being set in the same world as Heroes of Might and Magic V (and presumably the same universe as all the other Might and Magic games), there's little to no cross-over with the other titles, making the use of the Might and Magic franchise name questionable.

Overall, Dark Messiah is a very oddball and conflicted game. On the one hand, the environments and level design are particularly strong, and combat, though sometimes frustrating, can be satisfying once you've mastered the various sword fighting combos, blocks and, of course, the use of your Mighty Foot of Insta-Death. On the other hand, the storyline is not particularly compelling and the NPCs are extremely thin. Yet it remained interesting enough for me to finish the game and, since I only paid £3 for it in a Steam sale, was also reasonably good value for money.

Dark Messiah of Might and Magic (***) is a reasonably enjoyable game with enough problems to put off the easily-irritated. Those who persevere with it will - eventually - find much to enjoy. The game is out now in the UK and USA.
Posted by Adam Whitehead at 17:09

It's not exactly set in the same universe as the other Might and Magic games. The old M&M games had a different continuity, while Ubisoft started a whole new continuity starting with HoM&M5 and Dark Messiah.

DMMM and HEROES 5-6 take place in this new world of Ashan. Whilst there's nothing overtly placing it in the earlier M&M universe, there's nothing denying it either, and the M&M universe is so huge there need never be such a connection made clear. I prefer to think of the new world being in the same universe because otherwise there is no reason whatsoever to use the M&M name :-)

Well, they used the M&M name for Heroes 5 because it's a HoM&M sequel gameplay-wise, and then used it for other games set in the same continuity.

Dark Messiah is a hybrid between two things: Ars Fatalis and UbiSoft. The Might&Magic world that I love (I've played all the Might and Magics starting with the first, even Swords of Xeen!) has little to do with it. That doesn't mean it's a bad game. Ars Fatalis was a brilliant gem and I was really waiting for Dark Messiah to appear, since it should have combined two of my favourite games. I was disappointed to see that it was a high tech Ars Fatalis. Also, worth mentioning is that while I love M&M, I despise Heroes of M&M. It's a completely different game, different feel and different world. Even the 6-9 parts of the franchise don't feel as totally of the game. I still think the best of them all is Might&Magic III.

Anyway, to see what I mean, you should play Ars Fatalis. The team there started work on Ars Fatalis 2, only for it to become Dark Messiah, which is M&M in name only. I liked the game and I didn't notice the foot problem that you are discussing, since I was using magic everywhere. Kicking enemies felt fun, too :) You forgot to mention that you could have used the environment in your favour even without the foot. Water mixed with ice magic comes to mind, and all kind of setting stuff aflame.

The linearity of the game was Dark's greatest weakness, it had less story options than even Ars Fatalis. Also, since you are working from Ars, what happened to the mouse gestures and "Mega Vitae"? Large companies like Ubisoft have a knack of turning great soulful games into moneymaking zombies. For any shortcomings of Dark Messiah, I blame them.

Ooops, carried away... but this is one of my favourite subjects :)

Yeah, bought that back in 2006 when it came out. It was/is a nice action
game, it even has some replay value if you are looking for 30 minutes to relax. Story & variationwise it pretty much was a disappointment.