2090. Sixty years ago, humanity landed on Mars, and stayed. The First Hundred led the colonisation effort, soon joined by other colonists and settlers. Thirty years after arriving, the people of Mars demanded political independence from the trans-national megacorps that were gradually subsuming national governments on Earth into their influence. The result was the First Martian Revolution, a revolution that was crushed. During the fighting Phobos was destroyed, the space elevator linking Mars to space fell and two-thirds of the First Hundred were killed. 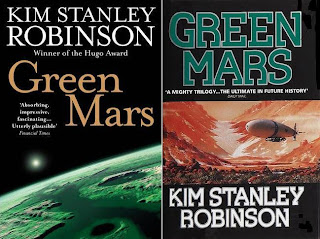 Mars is becoming greener, with algae, lichen and primitive plants growing on the surface. The atmosphere is thickening, the icecaps are melting and the terraforming is proceeding at a pace outstripping the most optimistic projections. Now several new generations of native Martians have been born, all chafing against the rule of a planet millions of miles away that they care little about. Thirty-nine of the First Hundred still live, their lives extended by an experimental - and expensive - treatment that is only available to the rich and powerful on Earth, fuelling civil unrest there, whilst being freely available on Mars. Over the course of almost forty years, the Martians prepare for a new bid for independence, one that will be led by reasoned argument rather than mindless violence.

Green Mars is the second novel in Kim Stanley Robinson's Mars Trilogy, his epic account of the colonisation and terraforming of Mars. The first novel, Red Mars, concerned itself with the initial landing, exploration and colonisation of Mars, and the changes wrought by the arrival of hundreds of thousands of fresh immigrants from different cultures, culminating in the bloody and failed revolution. The second novel is principally about learning from the mistakes of the first attempt and preparing for a second, more ambitious revolution. At the same time, the terraforming of Mars and the science behind it remains a key focus, as Robinson floods the Hellas Basin and Vastitas Borealis, tents over canyons to make viable living spaces, thickens the atmosphere, and increases sunlight through the arrival of a huge mirror in Martian orbit.

Green Mars is not an action-packed novel, although there are more action beats than I remember from my first read of this novel some twenty years ago. One of the First Hundred is imprisoned by one of the corporations and his comrades have to rescue him, whilst later on some of the more radical groups launch a terrorism campaign against the Earth-imposed government on Mars. Towards the end of the book, the second revolution is launched which results in some impressive imagery: the flooding of the city of Burroughs after the nearby dyke is blown and two hundred thousand people have to walk seventy kilometres to safety and trust that the atmosphere is as breathable as the scientists claim is a stirring image, almost as memorable as the fall of the space elevator in the previous novel.

But for the most part, this is a hard SF novel, concerned with the physical sciences involved in terraforming and with the social sciences of how to meld a new society together out of myriad competing interests. A minor weakness of the first novel is that Robinson's own politics were too often on display, but in Green Mars he does a better job of portraying all sides of the debate. The would-be rebels' extremely reluctant alliance with one of the more democratic megacorps seems to be an admission that as much as you may want to escape the woes of Earth and fly off to another planet to found a utopian paradise, you really can't, at least not whilst that society is dependent on science and technology to survive, and is not totally self-sufficient (yet, though by the end of the novel it's close).

For the most part, our characters are survivors of the First Hundred: Maya, Michel, Nadia and Sax, who have seen their dream (not unanimously shared) of a free, green Mars corrupted by corporate interests. They are joined as POV characters by Nirgal, the son of Hiroko, who represents the Martian-born generation, and by Art, representing the metanational corporation Praxis, who tries to form an alliance with the Martian revolutionaries and then finds himself unexpectedly inheriting the mantle of John Boone from the first book as the guy who can talk to everyone, no matter their agenda. Characterisation is pretty strong, helped by the fact that many of these characters are now extremely old and have changed a fair bit from the first novel: the formerly quiet Sax is aggressive and angry after a spell in jail, Maya has realised what an unpleasant person she was in her youth and is determined to change, and Nadia has embraced her status as someone who is respected and listened to (which pays off handsomely in the final novel in the trilogy). 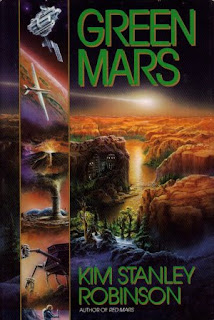 As with the first novel, this book isn't a thriller or an adventure (though it has elements of those in some sequences). It's a hardcore novel about how the colonisation of Mars could really happen. This manifests itself most notably in a lengthy mid-novel sequence in which the competing factions gather together to decide on the future of Mars. Rather than a quick gathering and a bunch of people agreeing on a way forwards, this takes the form of a month-long conference with tons of arguments which ends in a compromise declaration that satisfies no-one and people are unhappy with but nevertheless reluctantly agree on. Robinson draws parallels (some subtle, most not) not only with the Continental Congress and the American Declaration of Independence, but also with the Russian Revolution, even naming the chapter in question What Is To Be Done? Many will find this sequence mind-bogglingly boring, but those with an interest in history and politics will find it fascinating and convincingly realistic (though maybe only up until the slightly hippy-tastic closing ceremony where everyone celebrates the end of the conference by going surfing on an underground lake, which feels a bit random).

On the more negative side, Green Mars is almost 800 pages long, some 150 pages longer than the first book, and there is less decisive forward movement in the plot compared to the first novel. Some sequences feel rather skimmable, mostly those involving the in-depth political discussions on the differences between the Marsfirsters, the Reds, the First Hundred, the Bodanovists, the Arab settlers and what feels like fifty other groups. Yet Robinson is also laying out the groundwork for the explosive Second Revolution (the novel finishes with the revolution unfinished, giving us something of a cliffhanger), in particular having to explain how the mistakes of the 2061 rebellion are not repeated. Necessary, but not always gripping.

Beyond that, there are the rich, evocative and atmospheric descriptions of the changing Martian landscape, the sheer scope as Robinson tries to channel as many scientific disciplines as possible to paint the most realistic picture possible of the colonisation effort (in this regard there are similarities with Aldiss' similarly fantastic worldbuilding for Helliconia), the richly-realised characters and the sometimes poetic and lyrical power of his prose (though he falls back into a dry, academic and textbook-like approach a little bit too often).

Green Mars (****) won both the Hugo and Locus awards for best novel in 1994 and it's easy to see why. This is inspiring and epic hard SF, though it stumbles a little with pacing and tone. The novel is available now in the UK and USA.
Posted by Adam Whitehead at 11:50

I read this series in the mid-90's, and while I remember enjoying it at the time, I can't remember a single thing about it now. Good review!!

This was my favorite of the three Mars novels. You start to see some of the issues that will ultimately plague Blue Mars, such as overly long descriptive and self-indulgent scenes, but they're still fairly weak here.

You also get a much more political view of the whole situation, which I find fascinating even if some of the politics seems cringe-worthy and almost dated at times (you can tell this was a 1990s novel). The whole character arc of Art Randolph, from Praxis on Earth to Mars, was my favorite bit in the entire book.

My only real complaint is that I think the beginning section is too slow, focusing on the children of Mars. I wish they had made it much shorter, so we could get to Art Randolph sooner.