In the first casting announcement for Game of Thrones' forthcoming second season, it has been confirmed that actress Natalie Dormer will be playing Margaery Tyrell. 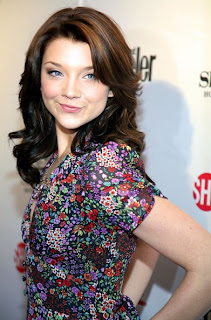 Natalia Dormer is an English actress with a string of credits to her name (including an appearance in the forthcoming Captain America movie), but is best-known for playing Anne Boleyn on the first two seasons of The Tudors. Her performance on the show was particularly acclaimed. 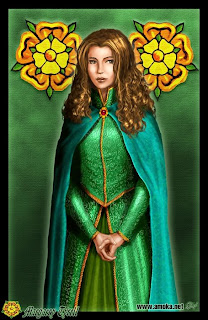 On Thrones, she will be playing Margaery Tyrell, the daughter of Lord Mace Tyrell and brother to Ser Loras Tyrell. In the books she is part of the intrigue put in motion by Mace as he attempts to attach his family to the Iron Throne, first as part of an abortive plot to have Robert divorce Cersei and marry Margaery instead (a plot wholly absent from the TV series) and later using her as a pawn when Renly Baratheon (Loras' lover) claims the Iron Throne.

According to the report, Dormer will be joining the show's regular cast, which is surprising news, given that Margaery is barely in the second book and doesn't really start playing a major role until the fourth. This move, as well as the casting of a reasonably well-known actress from another successful TV show, suggests that Margaery's role is being beefed up for the TV series. Exactly how much her role is increased by remains to be seen.
Posted by Adam Whitehead at 19:25

This made my husband VERY excited. I guess she's incredibly hot, or something.

I'm really looking forward to news about the casting for season 2 over the next month or so. I've heard Gerard Butler mentioned - shave most of his hair off, give him a beard and he's a dead ringer for King Stannis.

She looks a little old to be playing Margaery, even with the age-up for all the characters. How old is Margaery going to be in the show?

Gerard Butler strikes me as implausible. He has a huge movie career going on and appears to have a few projects coming up. In fact, he's probably higher-profile now than Sean Bean. Him agreeing to do a regular role in a TV series for potentially 6+ years just seems unlikely.

Agreed, it's just a rumour and may turn out to be completely untrue. I suppose the programme doesn't need a high-profile addition anyway since it is doing so well. By the way, enjoyed your posts about the Forgotten Realms and the other D&D settings.

Well, she has no problem with nudity so she will fit right in.

The "Gerard Butler" thing was only on IMDB, and probably from someone pulling a prank. He's way too high-profile, and too over-the-top to play Stannis.

Gerard Butler is who we don't want AT ALL in any role.
Curious about the whole Margaery thing though. Hope this doesn't mean they are going to veer away from the book too much. The high standard of season one is mostly due to the tight adaptation if you ask me, as the parts that were the most clunky were clearly added to convey background information.

I couldn't stand her in The Tudors, this is a genuine bummer for me.

Hm. I have to admit, although she is a decent actress, I don't see her at all as Margery. She just hasn't the look and is far to old.

As for expanding the role itself: Clever move. The first season has been especially good whenever they did bring something new, unexpected which wasn't exactly like that in the books.

The advantage the show has over the books is that they can show things where none of the books' point of view characters were present. This added a couple of nice scenes to season 1. The reason we didn't get a lot of King Renly and the Tyrell's in book 2 is because there's wasn't a POV character with them for most of the time.