Joel Rosenberg, an American-Canadian science fiction and fantasy author resident in the United States, passed away yesterday at the age of 57. 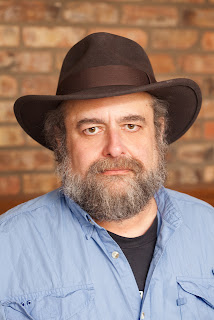 Rosenberg is best-known as the author of the popular ten-volume Guardians of the Flame series, about a group of role-players who are transported into the fantasy world they are playing in. He has also written SF about a world settled by Jewish colonists centuries in the future, and co-wrote a Riftwar mystery novel with Raymond E. Feist, Murder in LaMut. Rosenberg was also a noted and sometimes controversial proponent of private firearm ownership, becoming one after fending off a pair of burglars from his home. He is survived by his wife and two daughters.

Condolences and best wishes to his family. I have not previously read any of his books (he wasn't regularly published in the UK, Murder in LaMut aside), but have heard good things about the Guardians of the Flame series.
Posted by Adam Whitehead at 16:32

Guardians of the Flame was one of the first fantasy series I really fell in love with. Yeah, it has a fairly cliched "Earth-people-in-fantasy-world" sort of setup, but it explored the concept better than most other series.

If you have an eReader, webscription.net has the main heart of the Guardians of the Flame series for a really good price in a lot of DRM-free formats.

Anyway, I don't have much to say about his politics, but his books are still among my favorites.

Thank you for your kind words.