The land of Urulat is about to see the end of a conflict thousands of years old. The machinations of Satoris the Sower have been exposed and the would-be King of the West, Aracus Altorus, advised by the Wise Counsellor Malthus, has raised a mighty host to assault Darkhaven and rescued his beloved, Cerelinde of the Ellylon. It falls to Satoris' most loyal servants, the Three, to prepare his defence. But whilst great armies ready for the clash, it falls to two of the humble desert-people to find their way into Darkhaven and strike the blow that will render Satoris truly vulnerable. 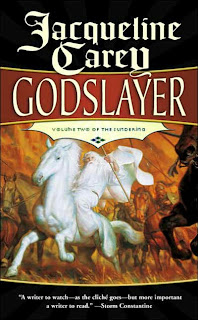 Godslayer is the second and final novel in The Sundering, a duology that studies and subverts the traditional epic fantasy paradigm as established by Tolkien. Like its forebear, Banewreaker, Godslayer is an epic tragedy, closely based on events and characters from J.R.R. Tolkien's The Silmarillion, Hobbit and Lord of the Rings, but at every turn analysing deeply every character's motivation. As Satoris ponders, does it matter that you are not evil if everyone else believes that you are?

This premise allows Carey to examine many themes and ideas, such as propaganda (Malthus/Gandalf as a sort-of Goebbels for the 'good guys' is an interesting take), destiny and the cyclical nature of history: just as Morgoth was cast down but his servant Sauron was overlooked, allowing him to return later, so Satoris has his own lieutenants who stand poised to inherit his mantle. These ideas are rooted in strong characterisation, particularly of Tanaros and Cerelinde, though other characters also come to the fore.

Godslayer suffers from some minor issues. The story is inherently predictable, once you realise what Carey is doing. Also problematic is that The Sundering is one novel split in two for publication (itself appropriate, since The Lord of the Rings was originally published as three volumes; the fact that Carey tells as epic a story in considerably less pages may itself before a comment on the fantasy genre), meaning that the two books do not stand well alone. Since both are available now and you can read from one into the next without a problem, this is not as much of an issue as when the book was newly-released.

On the plus side, this is a clever and thoughtful conclusion to the series. Through authors such as Bakker and Erikson, epic fantasy has of late been more and more interrogating itself and asking hard questions about its underlying assumptions, but Carey does the same here a lot more concisely. Carey also delivers a story that is an emotionally powerful tragedy. The opposing factions cannot agree on anything and good men on both sides die needlessly as a result of mistakes made thousands of years earlier. The reader becomes as frustrated as the characters do at the ongoing carnage that is only happening at the whim of the proud and long-absent gods.

Godslayer (****) is a worthy conclusion to this duology that questions the conservative nature of much epic fantasy and finds it wanting, as well as delivering a powerful and tragic tale in its own right. The book is available now in the USA and on import in the UK.
Posted by Adam Whitehead at 13:59