For the Win by Cory Doctorow

The near future. In India and China many thousands of gamers are slaving in PC sweatshops, working as gold farmers, accumulating virtual money in various online games and then selling it for real money to rich Western players who can't be bothered to put the grindwork in. However, there are growing calls for the gold farmers to unite and unionise for better conditions. And when that happens, the authorities strike back hard. 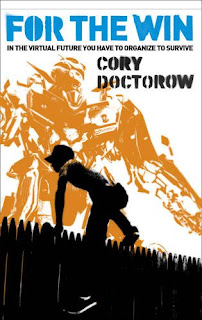 For the Win is based around the process of 'gold farming', a problem in modern computer games like World of WarCraft where poor players in the Far East do the hard work to make money for players in the West. The novel predicts that in the near future, these games' economies will become so vast that the gold farmers will become an institutionalised form of work, another Asian sweatshop churning out product for the benefit of the West. However, due to the fact this work is undertaken on the Internet, it also means that the gold farmers can communicate with not just one another, but other farmers right across the world, and that lays the groundwork for strikes and possibly even revolution.

Cory Doctorow's novel charts the rise of online gaming from a niche entertainment industry into a massive economy which can be gamed and exploited like any other. Many of the issues Doctorow has identified have already been the subject of studies by economic bodies, and he unifies a technical interest in the field with more human stories about worker exploitation and also a larger idea about how much longer can the single Chinese state control everything in the face of such vast influences from outside the country, particularly with regards to workers' rights and unions. For the Win is a slightly stronger novel than his earlier Little Brother, which tripped over itself and muddied up its themes towards the end of the volume. Here, Doctorow remains on-message throughout. 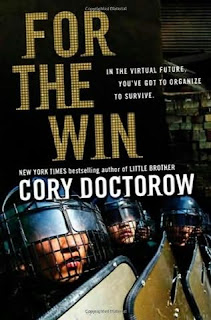 Structurally, the novel moves between several sets of characters in China, India and a couple of guys in the USA. These characters are well-characterised and carefully delineated so it's easy to keep track of who's who (the cast ends up being quite large). However, the novel meanders a little bit in its opening half. Character-building and plot-advancing scenes are bogged down by three-page divergences on economic theory, whilst Doctorow front-loads the book with a lot of MMORPG terms which have mostly disappeared by the time the book ends. At this stage it's like a Kim Stanley Robinson or Neal Stephenson novel (not exactly bad company to be in) with lots of interesting material, but it's unclear what the point of it all is. Then Doctorow draws the plot threads together in the second half, building to a big finale. I wondered if he was going for a world-changing, ushering-in-a-new-age ending, but instead Doctorow gives us something that is somewhat optimistic whilst retaining a fair degree of realism.

On the negative side, it's unclear if the book has already been outdated: the failure of any non-World of WarCraft MMORPG to take off in a significantly profitable manner in the West and the resulting move to microtransaction-fuelled social games (such as CityVille, which launched last December and had ten times as many players as World of WarCraft in less than eight weeks), a move followed by several of the standard MMORPGs, means that Doctorow's economic model in the novel is already looking dubious. Whilst gold farming in these social games is still possible, the much tighter regulations imposed by playing under the framework of Facebook would make some of manipulations as seen in the novel harder to pull off. That said, the recent ability of the Internet to influence political change shows that some of the ideas in the novel that initially look unrealistic are indeed possible. There is also some unrealistic dialogue (a paragraph-long speech from a player on economic power is impressive until you realise the person saying it is 14) and the ending hinges on the goodwill of people who have no real reason to support the gold farmers. But Doctorow just about manages to sell it.

For the Win (***½) raises and addresses a number of thought-provoking subjects related to the emergence of these online economies and their impact on developing countries. The book is available now in the UK and USA, or indeed for free from Cory Doctor's website.
Posted by Adam Whitehead at 17:17

Email ThisBlogThis!Share to TwitterShare to FacebookShare to Pinterest
Labels: cory doctorow, for the win

That still sounds like an interesting novel. I've read games adapted into novels, but never a novel about a specific gaming practice.

On a side-note, Gold Farming always struck me as a major design flaw in games. You could fix it by having inflation (so that the more gold is spammed out, the higher prices rise), or by putting in mechanisms to steal money from players sitting on too much gold.*

* My personal favorite would be NPC harassment. If you're sitting on a mountain of gold, suddenly the NPC rulers start demanding huge bribes if you want to live and do business in the town.

Have you ever even played a MMO ? You speak like you have no idea.

I spent a year playing EVE ONLINE and forcibly stopped myself as I wasn't getting anything else done. I also spent a fair amount of time with friends playing ULTIMA ONLINE and EVERQUEST back in the day, and a bit with WORLD OF WARCRAFT.

I am not a massive MMORPG fan. They haven't really live up to the potential of a player-propelled online game (though EVE has come closest) so far. I am, however, highly intrigued by the potential of THE OLD REPUBLIC.

I love the idea of EVE, I've got as trial account going now, but I can tell I'm not going to continue simply because I'm not particularly keen on paying for it each month, and the investment required to fund it by playing would be immense. I'm far more interested in Guild Wars 2, since it's free.

I'm wondering what you think of this report about Chinese prisoners being forced to play WoW so that the guards could pocket the profit from the sale of gold. (Hope I haven't misread the article) It seems almost like the sort of world in which "For the Win" might be possible, but since I haven't read the book I can't tell. At least it's free, I should give it a try...

Have you ever even played a MMO ? You speak like you have no idea.

Why do you think I stopped playing WoW?

This book sucks. It has too many characters added in throughout the story and is for nerds. DO NOT read. :)