Over the course of its first six episodes, Game of Thrones has engaged mostly in set-up and character building. In the seventh episode, the guns are fired, the avalanche begins and other metaphors are mangled as everything kicks off. 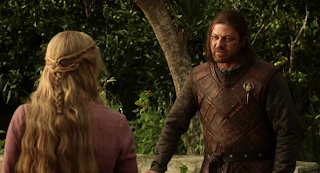 "I know the truth Jon Arryn died for."
"I know you know."
"But did you know that I already knew that you knew?"

Episode 7, You Win or You Die, takes its name from the confrontation between Cersei Lannister and Eddard Stark in which all pretences are dropped and they put their cards on the table. The 'shock reveal' of the truth that Jon Arryn died for is perhaps less effective on screen, given that the audience has a had seven weeks to muse on the matter (compared to the few days it takes to read the book, and even then a lot of people work it out ahead of time), but Sean Bean and Lena Headey play the scene for all its worth. Elsewhere, Mark Addy confirms what an excellent - if slightly eyebrow-raising - choice the producers made in casting him as he infuses Robert Baratheon's last few hours with regret and defiance.

The rest of the episode is likewise excellent (excepting one scene), as Eddard is given various options on how to handle the crisis. He can bend the knee now and hope to do something later on when he has a better hand to play, or seize Joffrey before the crisis can arrive in full. Yet at every turn Eddard listens to the wrong advice, trusts the wrong people and tries to rely on his honour and honesty in a court where these things are more hindrances than assets. Events build to the final confrontation in the throne room which is portrayed excellently. 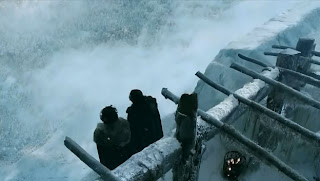 "Man, it worked when Tyrion tried this."
"Just think of a waterfall, or drink some more water."
"No, no good."

The intensity of the King's Landing storyline leaves little time for events elsewhere, so no Catelyn or Tyrion this week. We do get a brief glimpse of the Wall, where Jon and Sam swear their oaths to the Night's Watch and Sam shows some smart micro-politicking to appease Jon when he feels he is given an assignment beneath him. There's also a longer scene across the Narrow Sea, when Daenerys faces an assassination attempt in Vaes Dothrak, culminating in Ser Jorah Mormont (I've said it before and will say it again: Iain Glen is excellent in a minor role) choosing sides and Jason Momoa's infamously cool Khal Drogo completely losing it as he vows to invade Westeros and avenge the attempt on his wife's life. Excellent stuff on both counts.

Unfortunately, the episode's ascent towards true greatness is abruptly derailed when we get a five-minute soft porn scene for absolutely no discernible reason. Game of Thrones' biggest weakness to date has been its reliance on sex and nudity to spice up exposition scenes, despite the fact that for most of the history of fiction, powerfully dramatic scenes involving two people talking in a room with their clothes on have been the norm. The scene involving Ros (the only prostitute in Westeros, it feels at times) and another girl faking in the background whilst Littlefinger monologues about stuff we already knew is downright cringe-inducingly embarrassing. I like Esme Bianco's performance and the attitude she gives Ros, but there's the distinct feeling that she's being overused at the moment and her sexposition scenes (to use the buzzword of the moment) are taking time away from other storylines. Is it right that a character not even in the books has had more screentime and dialogue then Sandor Clegane at this point? So, a poor scene that detracts from an otherwise fine episode. 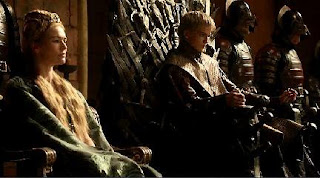 "My first act as king is that I'm going to order the Lannister guardsmen to get some proper helmets. Seriously, what is up with those things? I though a helmet was supposed to protect your whole face? I'm surprised any of you guys have chins left."

No such problems with The Pointy End. It's easy to imagine George R.R. Martin showing up to write his episode, running a critical eye over the series, and immediately wading in to fix the (very few) things that need fixing. So no Ros, no sexposition scenes, no clunky explanations of background detail, just the plot-accelerator being slammed to the metal. Sophie Turner and Richard Madden have been a bit under-used in the series so far and, in the case of Sophie Turner's Sansa, made positively unlikable by some questionable writing decisions in the first few episodes. The Pointy End sees both step up to the mark, with Turner delivering a much more relatable performance as she strives to balance her horror at the chaos of the coup against her genuine feelings for Joffrey and her urgent desire to save her father from execution. These things allow Cersei to play her like an instrument into doing exactly what she wants.

Then we see Richard Madden stepping out of the background to turn Robb into a decisive leader, slapping down unruly bannermen, raising an army and even slyly feeding Tywin Lannister false information about his army's numbers. This is the same Robb we briefly saw staring Tyrion down in Winterfell, a point Tyrion remembers well and ponders if his father is severely underestimating the 'green boy'. This part of the episode - Robb goes from sitting at home to commanding an army of 20,000 in the field in just a few minutes - unfolds rather rapidly, but then it does in the book as well, and given the time constraints the series is under, the producers and Martin do a great job of not making it feel too rushed. 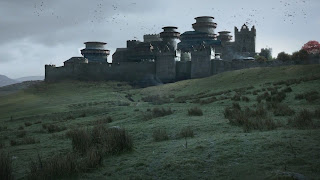 Similarly, Tyrion's rapid recruitment of the mountain clans (featuring a good performance by Mark Lewis Jones as the manhood-eating, goat-obsessed Shagga) is on the quick side, but the actors manage to sell it very well. It's also good to see solid supporting actor Ian Gelder as Ser Kevan Lannister, Tyrion's uncle, whilst Jerome Flynn continues to banish his easy listenin' pop star days behind him with a great performance as Bronn (and it's great to see new viewers of the TV show asking for what book readers have wanted for years, the spin-off series in which Tyrion and Bronn travel the Seven Kingdoms getting into scrapes). The best part of these scenes, though, is seeing the normally cocksure Tyrion visibly wilting under his father's stern glare, and no-one does stern glares better than Charles Dance. 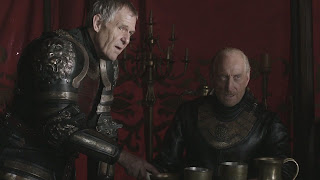 At the Wall, Jon Snow briefly turns into an undead-slaying warrior as we are reminded about that whole White Walker storyline from the first episode, and it's good to see Ghost more frequently, even if in this episode he does seem in danger of turning into Lassie. "What's that, Ghost? Undead wights are rising from their deathless slumber to destroy the world of men? And you've urinated on my socks?" I'm also not entirely sure if a thrown oil lamp would really act as a firebomb as effective as napalm, but what the hell, it looks cool.

In the east, the Dothraki attack and destroy a Lhazareen village in a scene notably downplayed from the books. This then leads up to a scene where Jason Momoa shows exactly how dangerous Khal Drogo is, as he takes down a rebelling warrior without any weapons. The action beat is great and Daenerys' blow for women's rights is welcome in a series is which has occasionally misstepped in its treatment of women and sexual issues. 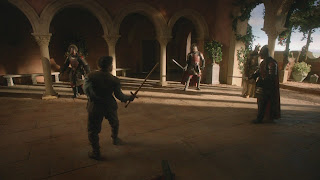 Overall, The Pointy End is the finest episode of the series to date, and I haven't even mentioned the epic face-off between Syrio Forel and the Kingsguard ("The First Sword of Braavos does not run,").

Email ThisBlogThis!Share to TwitterShare to FacebookShare to Pinterest
Labels: a game of thrones (TV series), a song of ice and fire, game of thrones tv, george r.r. martin, hbo

great review as usual! GRRM rocked it with episode 8... certainly agree with the overuse of "sexposition" scenes - waste of valuable screen time - but what I could really do with is a lot less of the "Dongsposition" scenes.. (although the Boogie Nights Hodor scene was pretty hilarious..)

Loved episode 8 as well. Were there any other shows that george had (if at all) worked on?

and I know I might get shot down for this considering the wait for ADWD, but this episode REALLY makes me wish that george were on of the head writers on the show (hey, a fanboy can dream right?).