Speculative World Map for A SONG OF ICE AND FIRE

Thanks to one of the more detailed maps of the Free Cities that appeared today, I have managed to assemble a very rough speculative world map. 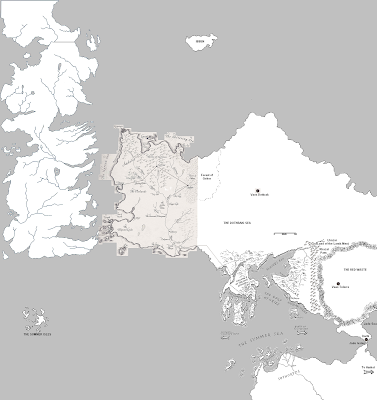 I can see my house (of the Undying/Black and White etc)!
Obviously, Westeros is in the west, with the Free Cities immediately across the Narrow Sea to the east. Further inland is the vast Dothraki Sea and the city of Vaes Dothrak. South-east of there lies Lhazar, land of the lamb-men (where Daenerys hatched her dragons), and further south is the forbidding Red Waste and the great trading city of Qarth on the entrance to the Jade Sea.

Note that, whilst much of the coastline and in particular the area around Qarth is totally random, the distance from the Free Cities to Slaver's Bay is accurate. I also based the far north-eastern coast of Essos on screengrabs from the Game of Thrones TV title sequence, which shows the coastline beyond Vaes Dothrak. I also included the Summer Isles (south of Westeros) and the Iceland-like island of Ibben in the far north. Not show are Asshai and the other lands of the Jade Sea. In addition, I based this map on the 'Jade Sea = Indian Ocean' school of ASoIaF cartography rather than the 'Jade Sea = Black Sea' school, pretty much for no other reason than I felt like it.

So there you go. It'll like be some years - if ever - before a full and official map of the world emerges, but this should hopefully make things a little clearer.
Posted by Adam Whitehead at 19:23

Email ThisBlogThis!Share to TwitterShare to FacebookShare to Pinterest
Labels: a game of thrones (TV series), a song of ice and fire, george r.r. martin, maps

Nice! I've longed for a map of the Free Cities. I do however think that you're placing the Summer Sea region too far to the southwest
My thoughts are that the bays you see on both maps corresponds to eachother.
But I'm guessing that you base your placement on stated distances in the books?

In addition, I based this map on the 'Jade Sea = Indian Ocean' school of ASoIaF cartography rather than the 'Jade Sea = Black Sea' school, pretty much for no other reason than I felt like it.

I couldn't tell from the map, since we only get a small glimpse of the Jade Sea. It could either expand into another ocean, or become a Black Sea-equivalent. My money is still on the "Black Sea equivalent", since one of the books mentions a trade route that circles the Jade Sea.

It'll like be some years - if ever - before a full and official map of the world emerges, but this should hopefully make things a little clearer.

We might get a more expansive map when the World Book comes out, but I doubt it will cover much more than what you have on your map. At most, it might include a map of the Jade Sea.

In the Black Sea model, the Summer Sea continues eastwards underneath the whole Essos continent, whilst the Jadea Sea is an almost-landlocked bay with Qarth guarding the entrance. The Black Sea model is favoured because of the 'traders circle' reference and also because Qarth is quite blatantly based on Constantinople.

However, the Indian Ocean model is favoured because of the general direction of the landmasses on the maps (the coasts of Sothoryos and Essos look like they're heading for a close meeting). In addition, people never mention travelling further than Asshai. In the Black Sea model, if the Summer Sea continues off in a different direction, you'd assume there'd be at least rumours of further lands and so on off that way.

This question could be solved by someone just remembering to ask George at a con, but everyone always seems to forget :-)

So is it SOTHOROS or SOTHORYOS? I'm re-reading AFFC (The Iron Captain chapter) and it was mentioned as SOTHOROS.

The two spellings appear to be interchangeable. Either that, or GRRM goofed at some point and made it look like a retcon.

I find it interesting that so many major cities are located on islands just off shore of Essos. I count six (Braavos, Lys, Lorath, Tyrosh, Elyria, and New Ghis) which is about a third of the major cities in Westeros/Essos, or the parts that we've seen. This is not a common arrangement in the real world.

If following the Jade Sea = Indian ocean model,then using your map, does that mean that Asshai is loacted on Sothoryos?
I can't recall a stecific insistance from the text that Asshai is on Essos, but have always thought it that way. Or am I just reading far too much into something you've just slapped on there? :)

So I am currently on a re-read of ACoK, and if I am understanding correctly, after Vaes Dothrak and the attempted assassination, Khal Drogo et al. were heading back west toward Westeros when he died and the dragons were hatched. After that, Dany debates where to go, and she says that she cannot head north through the Dothraki Sea, nor "south of the river" through the lands of the Lamb Men, nor downriver to the ports at Meereen and Yunkai and Astapor. Instead, she follows the comet, which is in the east (yes??). It is in that direction that she finds the Red Waste and eventually, Vaes Tolorro.

All this is to say that, I think that Vaes Dothrak might have to be more north and east of Meereen and the Lands of the Lamb Men. I'm not sure how to squeeze all that in, however.

When will you be wrapping up your ASOIAF recap? There is still one more article to come,right?

Dude, there are dragons and shit. The real world doesn't enter into it at all.

1 more to come. That's the priority for tomorrow. It's not going to take six years and get split in half for length ;-)

"If following the Jade Sea = Indian ocean model,then using your map, does that mean that Asshai is loacted on Sothoryos?"

Yeah, Vaes Dothrak being east of Meereen is a possibility, though the TV show title sequence map doesn't put it that far east. On the map, the location of Vaes Dothrak is probably the most flexible thing on there. There probably should be more distance to Qarth as well, so Dany's journey across the Red Waste can be more south-easterly than due south (in the book she sends out riders south who find only the sea and south-east to find Qarth). I just wanted to put Qarth on the map :-)

I've had a thought that the Jade Sea would make a fine earth-analogue (as the novels and subsequent cartographers of this millieu seem to be fond of) for the Pacific Ocean.

In the Pacific's ancient past, although it was a vast ocean, it was encircled by an ocean-going trade of Jade rocks and artifacts of Jade between Asia, The Americas, and New Zealand.

Thank you for this. With the maps provided in the book you can't get a feeling for the whole shape of the world.

Many thanks for that, this looks really good and thought-through.

One comment: Looking at the HBO opening sequence (e.g., screenshot here), shouldn't there be some big-ass land mass north of Essos and across the Shivering Sea? (maybe Ibben?)

And one question: Looking at that same HBO picture, it looks like there is land west of Westeros, too---do you think that is just Essos again, wrapping round the world to re-appear in the west? Or some other continent? If it's the eastern part of Essos, that would give you some contours to work with at least :-)

BTW, in the screenshot there seem to be a load of cities/places inscribed in red on Essos and this west-of-Westeros thing. Anyone have a high-res version of that HBO sequence to make out if these are actual cities or just bogus text or what?

The HBO map can best be described as 'total bollocks' :-) The landmass north of Essos and north-east of Westeros does not exist and is an invention of the title sequence creators. Same thing for the landmass west of Westeros (which I believe is indeed supposed to be the east coast of Essos, but the globe the map is on is very small, so the 'real' distance from western Westeros to eastern Essos would be colossally larger).

A very careful examination of the western landmass reveals details from Westeros which are simply copy and pasted onto it (the Iron Islands and Dorne can both be found on it, as can Karhold), so the coastline isn't canon either.

Hi Adam,
Who created this map, yourself? I was playing around in Photoshop and combined this with Pearson Moore's excellent Westeros map(http://winterfellkeep.com/Misc02.aspx). I find it helpful as I'm reading Dance with Dragons right now.
- Andrew Taylor agt2@rice.edu

The Pearson Moore map is actually from HBO.

Yeah, this map I created by combining various maps together. I have a cleaner version I'm working on.

Nicely done....howeever,I believe that the Summer Isles sre much closer to Essos-they should be IN the Summer Sea....I presume that the Isles are actually near Naath....also,I miss Asshai-I hope Martin will soon discover us more about Asshai....anyway-nice work