I reported a few weeks ago that HarperCollins Voyager are releasing new limited edition hardcovers of A Song of Ice and Fire. This has now been followed by the announcement that they are also releasing new, mass-market hardcover editions of the first four books of the series. 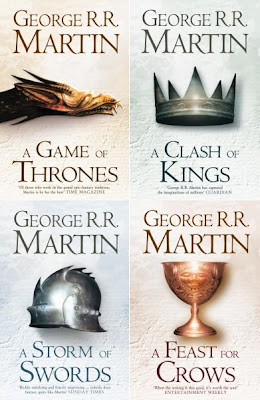 This is an unusual move. In the UK, it is standard practice for the hardcover editions of novels to be withdrawn from sale upon the release of the mass-market paperback. This drives sales of the hardcovers (since British customers know they only have 6-12 months to grab it before it vanishes, probably forever). This is in contrast to the USA, where the hardcover can often remain in print alongside the paperback for many years, or indeed permanently. In the UK only mega-selling books and series get hardcover reprints, such as Tolkien, J.K. Rowling and Dan Brown.

This news means that A Game of Thrones, A Clash of Kings, A Storm of Swords and A Feast for Crows are getting their first UK popular hardcover reprints since publication. The new cover art uses the marble-white/cream colour design of the Dance with Dragons hardcover, combined with the heraldic designs from the existing paperback editions. In addition, A Storm of Swords has been recombined into one novel (it is currently two volumes in paperback).

The first two books will be on shelves on 11 November 2011, whilst the latter two hit the shelves on 5 December. There is no word on if the hardcovers will continue the practice from the recent B-sized paperback reprints of using confusing and sometimes inappropriate maps (Game of Thrones having the totally superfluous map of Slaver's Bay from Storm of Swords in it, for example). Hopefully they'll straighten this out and use more appropriate images in the hardcovers.

In additional news, The World of Ice and Fire companion book (currently hoped to be released in late 2012) still does not have a UK publisher. Considering the immense success of the novels in the UK following the arrival of the HBO series and A Dance with Dragons, it is surprising that Voyager have not signed up the book yet. However, there will be another companion book related to the TV show published next year. The publisher for that has not yet been confirmed.
Posted by Adam Whitehead at 13:32

Email ThisBlogThis!Share to TwitterShare to FacebookShare to Pinterest
Labels: a game of thrones (TV series), a song of ice and fire, cover art, george r.r. martin, hbo, news, the world of ice and fire

Sorry, forgot to add the link to the Voyager homepage. There are Amazon links there.

These look fantastic. I especially like the varying line thickness of the font set against the cream.