A fresh attempt to reboot the classic British space opera series Blake's 7 has been announced. 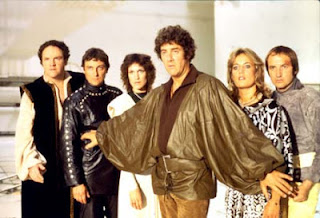 The original cast of Blake's 7 (the seventh character was an advanced AI and is not shown).

Martin Campbell, most famous for directing the James Bond movies GoldenEye and Casino Royale (and thus introducing two new Bonds to the franchise), has signed on to direct a pilot episode. Joe Pokaski, a writer on CSI and Heroes, is penning the script. Georgeville Television (a newly-formed production company) will handle the production of the pilot, which will then be shopped around to American networks and stations.

Blake's 7 ran for four seasons and 52 episodes from 1978 to 1981 and chronicled the attempts of a crew of desperadoes, political dissidents and idealists to bring down the dictatorial Terran Federation. The show was notable for an evolving storyline where things would change and stay changed (in stark contrast to most episodic television of the time) and its willingness to kill off characters at the drop of a hat. The series was also notable for its deconstruction of the heroic myth, with the writers constantly subverting and challenging lead character Blake's motives in trying to destroy the Federation. It was adult, thoughtful science fiction which unfortunately was made on a budget so minuscule it was barely detectable. Costumes and sets were poor and the quality of the guest actors highly variable, though the regulars, particularly Paul Darrow as the calculating, cynical and pragmatic Avon, were pretty good.

The show is also notable for its bleak ending, where the entire crew is wiped out in an ambush, their spacecraft is destroyed and the Federation left victorious. Actually, this was only meant to be an end-of-season cliffhanger leading into a fifth year, but the BBC decided to cancel the show on an inexplicable whim despite it gaining impressive ratings in its final few episodes.

There have been several previous attempts to reboot the series or make a Next Generation-style sequel, some of them sponsored by the previous creative forces and actors, particularly Darrow. The previous attempt was scuppered in 2008 when the British Sky network and ITV considered collaborating on a new series. ITV pulled out and Sky continued the project alone before dropping it a few months later.

The news of the show's possible revival is welcome. Blake's 7 was a direct inspiration on Babylon 5 (Joe Straczynski has always cited it as a huge influence) and a probable one on Firefly (Joss Whedon has said he watched the show whilst attending a British school). With its cynicism, political awareness and hard-headedness, it was the new Battlestar Galactica, but airing at the same time as the original BSG. To say it was ahead of its time is an understatement, with many of its innovations (serialised storytelling and season-ending cliffhangers) not becoming regular occurrences in SFTV for more another decade. Hopefully the reboot/reimagining will capture some of the same aspects that made the original show great. If it's treated as just another generic space opera it will fail. No word yet on if any of the original actors or creative forces will be involved.
Posted by Adam Whitehead at 18:11

Email ThisBlogThis!Share to TwitterShare to FacebookShare to Pinterest
Labels: blake's seven, news, please try not to screw this up

This is great news! I loved the show when I was a child and just last year I've watched it again. Amazing how childhood fantasy can change the show. I had a completely different story and details in my head until last year.

Anyway, I can barely wait to see a remake, although I really hope it doesn't turn out like the V 2009 attempt.

Still my favourite 'ending' to a drama, it was shocking at the time and led to my love of endings (be it novel/film/TV) that were bitter sweet at best and nihilistic in the extreme. It would be nice to see a bigger budget remake but please, no excruciating 'comedy' episodes that occur now and again in modern series.

"A writer from CSI and Heroes"

I thought the 7th member was the Liberator, Orac came along later?

The 7th member was Zen, the controlling AI of the Liberator: the two weren't quite identical, as Zen was taken offline several times and the ship remained operational.

This did result in a 'problem' that after ORAC's introduction there were 8 crewmembers, but this was solved by killing off one of the characters a few episodes later. After that there was consistently 7 characters.

Something to look forward to - I still remember being shocked at the final ending and instantly ringing my brother to discuss it - interesting that there should have been another series.
Lets hope the quality survices the transfer.