Chris Wooding has announced that the forthcoming fourth novel in the Tales of the Ketty Jay steampunk airship series, The Ace of Skulls, will be the final book in the series. Originally Chris had planned to write a series of self-contained adventures with a few continuing elements, but during the fourth book discovered that the number of continuing storylines he'd built up had become larger than he'd planned. He's chosen to end the story definitively rather than risk it sprawling out of control across numerous volumes. 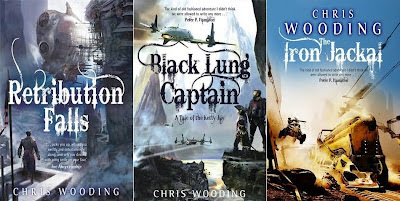 No word on what his next project will be post-Ketty Jay, but Wooding is also working on a 'remastered' ebook version of his earlier Broken Sky series of anime-influenced short novels. Wooding will be self-publishing these books himself in Kindle and ePub formats, with a date still to be decided.

Good news on the Broken Sky situation, but the conclusion of the Ketty Jay sequence will be a sad day. Still, better for the author to finish it on his own terms rather than drag it out for years for financial gain.
Posted by Adam Whitehead at 14:19

i like it. chris is a really good writer. loved the fade as well as the rollicking ketty jay series. see what you can dazzle us with next mate

I'm a bit sad about this as the Ketty Jay series has been hugely enjoyable but it's probably the right time to end it.

yeah, that's a bummer. What is worse is the fact that I haven't even read the Iron Jackal because neither the book or e-book are available in the US. :( I hope to get an e-copy soon. And as long as he handles it well, I'm good with a four book series with a definite ending, instead of risking the series becoming a meandering mess.

It's a shame as these books are brilliant. Another 3 novels would have been nice. Although ending the series on a high would be great.

Such a shame! I guess nothing is worse than watching a series you love get written to death, though. @Jeff, you can do what I did and buy the Iron Jackal on the UK amazon.com; I was annoyed that I had to go that route, but it was better than not getting to read the book.