The UK cover art for Joe Abercrombie's Red Country has been unveiled: 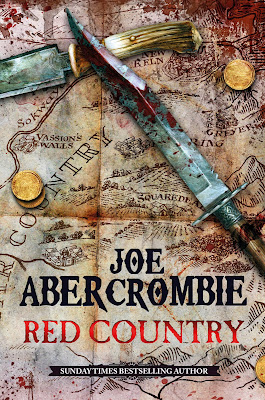 And the full cover:

The US cover art, which has been previously unveiled: 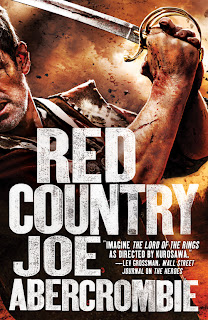 "They burned her home. They stole her brother and sister. But vengeance is following.

Shy South hoped to bury her bloody past and ride away smiling, but she’ll have to sharpen up some bad old ways to get her family back, and she’s not a woman to flinch from what needs doing. She sets off in pursuit with only a pair of oxen and her cowardly old stepfather Lamb for company. But it turns out Lamb’s buried a bloody past of his own, and out in the lawless Far Country, the past never stays buried.

Their journey will take them across the barren plains to a frontier town gripped by gold fever, through feud, duel and massacre, high into the unmapped mountains to a reckoning with the Ghosts. Even worse, it will force them into alliance with Nicomo Cosca, infamous soldier of fortune, and his feckless lawyer Temple, two men no one should ever have to trust…"

UK covers are always so much better than US covers.

I expect nothing but the usual bloody-muddy-visceral-violent awesomeness from Joe (top 5 authors for me personally) - but I have to say - after reading the cover blurb....kinda sounds a little familiar?? a woman, after vengeance, allied with Cosca? hmmmm...

But no matter - I am sure it will be great and I can't wait to read it!

That US cover does seem to show a man whose left hand appears to be missing a finger.

Yeah, I dont quite understand the new trend in the US cover art scene. Everything I see lately is terrible and makes me not want to read the books. UK cover is rather awesome, but some of the covers I see from Spain, Germany, and Portugal have been really great.

Jumps up and down the sofa overly exited...if dumb old dad Logan?? I miss him so much in the Heroes.

the UK cover is beautifull. "You can never have too many knives" - right? :)
I really don't think the US cover is very inspired, but... i don't live in the US. Maybe that's the type of cover that sells books there.

Anyway - looking forward for the book, regardless of the cover! I would read it even if they printed it on the back of a milk carton!