Shevek is a brilliant physicist from the barren anarchist world of Anarres. His work could revolutionise interstellar society, permitting instantaneous communication - maybe even instantaneous travel - between the worlds of humanity. But, in contrast to the idealism of Anarres, he finds his work undervalued and even repressed by jealous colleagues. Frustrated, he travels to Anarres's capitalist sister world of Urras, hoping to find more tolerance there but instead becoming embroiled in politics, rebellion and war. 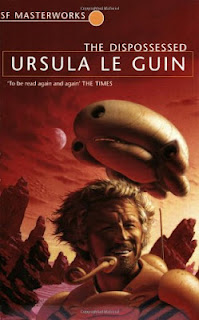 The Dispossessed is widely considered to be one of Ursula Le Guin's finest novels and is arguably her most ambitious work. The book asks nothing less than how best should human society function and by what means. Le Guin picks two popular models, that of a semi-communist state and a capitalist one, and pits them against one another. She is not interested in 'proving' the values of one over the other, instead comparing and contrasting the strengths and weaknesses of both and also the affect they have on the individual, particularly on the individual who has a great, transformational idea but whom is seen by others purely as a pawn or something to be crushed.

The novel relies on this thematic idea to sustain it, but the actual plot structure is also intriguing. The book alternates chapters between the present-day storyline (Shevek on Urras) and events in his past (Shevek growing up on Anarres). We see the present-day Shevek as being an open-minded, questioning individual and how he has changed from his earlier incarnation as a blinkered man who accepts dogmatic ideas as fact (such as the notion that Urras is a corrupt capitalist state that will one day destroy itself), with later Anarres chapter depicting his shift in belief and motivation. Le Guin constantly has Shevek developing as a character even as she develops her ideas and the setting of the two worlds. 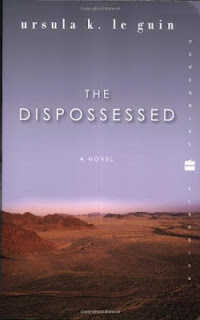 The novel's greatest strength is its depiction of someone who seeks simple answers and is instead rewarded with having his worldview broadened and made more complicated. Shevek sees Urras as the answer to all his problems but instead of the utopia he was hoping for he finds a cluster of nations all feuding with one another (at one point fighting a Vietnam-style proxy war between two superpowers with the rulers acknowledging that nothing will change, only thousands dying for no real goal). Anarres is not rose-painted either: the world is desolate, the people poor and, for all of their freedom of choice, are often forced into jobs and roles they despise and are not well suited-for. The book is sometimes criticised for condemning capitalism and promoting communism/anarchism, but it's more complex than that. Le Guin's argument appears to be that all human societies are prone to dysfunction and corruption, no matter how well-meaning people are.

The novel's ending is intriguing, as Shevek's conflicted views are commented upon by an outsider (an ambassador from an Earth ruined by war and ecological disaster) and her analysis spurs him to reconsider his approach. However, the book somewhat abruptly ends before Shevek's return to Anarres with him not having reached a conclusion. This is presumably because any answer would be unsatisfying and simplistic. Instead we are left with the questions, which are far more interesting.

The Dispossessed (*****) is a thought-provoking novel that does not attempt to simplify complex matters and combines fascinating worldbuilding and character development with a refreshing plot structure and some rich prose. The novel is available now in the UK and USA.
Posted by Adam Whitehead at 14:48

Haven't read this (shame on me, I know) but how do you get a "communist/anarchist" state? I know there are people who profess to be both, politically, but in practical terms the two systems seem like virtual opposites when used to run an actual state. Or is my political ignorance showing?

I think the idea is that it's communism (everyone is equal and works for the good of the state and thus everyone else) via anarchy (everyone can do what they want, except when it would harm society, which is quite frequently). The fact that the society isn't as 'anarchic' as was originally intended is part of the book, although there is the suggestion that true anarchism on a planet as hostile as Anarres is not possible.

Great novel, by far my favorite of Le Guin's.

One of my favourite novels of all time.