Normally I start reviews with a mini-plot summary but I won't do that here, because trying to condense Caine's Law down to a paragraph without indulging in major spoilers or causing my brain to leak out of my nose is simply impossible. 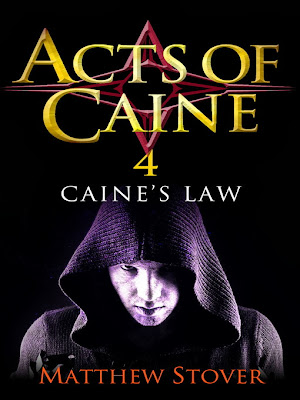 What Caine's Law is, however, is the fourth and to date final book in the Acts of Caine series.  Future sequels are possible but this book provides enough closure that the series can end here if necessary. It's also the second half of the previous novel, Caine Black Knife, which ended on a series of cliffhangers which Caine's Law does - eventually - resolve. It does take its sweet time doing so, however because Stover's primary focus in the rest of the book is tapping on his readers brains until they turn into confused mush.

Caine's Law takes place before, during and after Caine Black Knife. It riffs on elements from Blade of Tyshalle, and events that took place between that book and the first novel, Heroes Die. It explains exactly how some rather implausible events in earlier books really unfolded. It has time travel and alternate timelines, and uses the term 'unhappen' a lot. Events in the deep back-history of Overworld are explained. Major characters reappear, despite some of them being very dead indeed.

This is the sort of book where a very clear, action-adventure chapter (and few authors do action-adventure as well as Stover) can be followed by an interrogation sequence where both captors and captive spend most of their time debating the literary merit of To Kill a Mockingbird. Chapters featuring heavy magic use and explosive set pieces sit alongside explorations of a key thematic element involving horses and how they see the world. Caine being a smart-arse and swearing a lot is mixed up with discussions on the nature of reality, friendship and acceptance. Caine confronts the demons of his past and deals with them, sometimes maturely, sometimes by kicking them in the balls, and sometimes by making sure they never happened at all. If the Acts of Caine series wrong-foots the audience with each book being a shift in gear and almost genre, Caine's Law delights in wrong-footing them chapter by chapter. 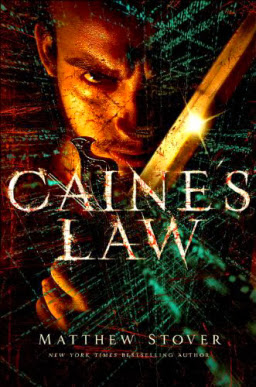 This is a novel that is severely confusing and ultimately you have to stop trying to understand it and instead read each section (the book is broken up into episodes) on its own merits. Eventually the book's mind-shredding narrative structure coalesces into something that does make sense. In the wrong hands this would be disastrous, but Stover ensures that even when you can't see how a particular episode fits into the overall structure of the novel and the series, it's still enjoyable on its own terms. As usual his actions scenes as visceral and vivid, his characterisation is nuanced and complex and his worldbuilding is sublime. The novel is also as 'grimdark' as anything in the genre but also has a very powerful commentary on issues such as gender relations and power imbalances without every getting preachy.

Caine's Law (*****) feels like a collaboration between Richard Morgan and Christopher Priest, but with an attitude and energy that is 100% Stover. Intelligent, thought-provoking, action-packed and featuring a recursive narrative structure that borders on genius, Caine's Law is a totally different kind of fantasy novel, and confirms this series as the most criminally underread series in the genre. The novel is available now in the USA and as an ebook-only release in the UK.
Posted by Adam Whitehead at 14:35

As per Facebook, Mr. Stover has officially promoted you to Favorite Critic Ever.

(Personally, I agree with every word you wrote. I gave up trying to understand Caine Black Knife, figuring it would all make sense by the end. I was right, and just applied the same theory to Caine's Law. Brilliant. Utterly Brilliant.

Stover doesn't always hit me the right way, as he often focuses his books on stuff I don't really care about. But I truly believe he is the most talented fantasy writer in the genre right now.

I've read Heroes Die and Blade of Tyshalle. You've made me very very tempted to try CBK and CL. However, my problem: you've given the entire series 5 stars and if CBK and CL are anything like BoT I'd rather not bother.

I suppose I'm hoping that Blade of Tyshalle was a one off, maybe due to rushing for a deadline and not taking time to edit properly. Yes, some amazing scenes, but messy punctuation and lots that needed cutting.

CAINE BLACK KNIFE is much more straightforward than BoT, and both books are much shorter (BoT is about 750 pages IIRC, whilst even CAINE'S LAW, which is equally dense plotwise, is only 450).

Criminally underread? Maybe if Blade was available in book form for a decent price, more people would pick up the series.

I just realized who Caine reminds me of. He reminds me of Remo from the destroyer series.the same build, the same ruthlessness, the both fight will skill not brute stength, oh and the same black eyes.