The Shadowed Sun by N.K. Jemisin

The city of Gujaareh chafes under the rule of the Kisuans, who lack respect for the traditions of the city and its priesthood. When a son of the previous, deranged prince emerges as a warleader of a fierce barbarian tribe, the inhabitants of Gujaareh prepare for a rebellion...until a mysterious plague begins striking at the populace through their dreams. 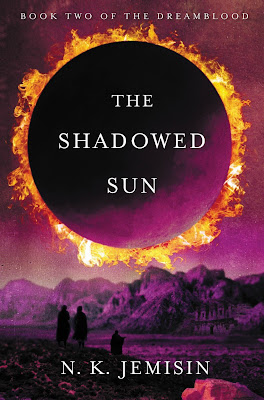 The Shadowed Sun is the second and concluding volume of the Dreamblood duology, following up on The Killing Moon. This book sees N.K. Jemisin shifting gears from the first volume, which was focused more on investigations and conspiracies within the city. This second book is more about politics, the gathering of armies and, well, perhaps what can be described more as 'traditional epic fantasy guff'. However, Jemisin's take on traditional epic fantasy guff is refreshing, with the narrative never caving in to cliche and with widely-diverse storylines converging in unexpected and unpredictable ways.

As before, this is a character-based fantasy. The surviving characters from the first book take a back seat: Sunandi only gets a few scenes and Nijiri is in a supporting role only. The focus is on Hanani, the first woman to join the priesthood of Hananja, and Wanahomen, the exiled prince-in-waiting. Jemisin handles these characters with impressive skill: Hanani is inexperienced but rapidly learns the ways of the world and proves more resourceful than she was expecting. The usual learning-and-growing stuff, sure, but depicted with some interesting twists. In particular, Hanani's success in navigating the shoals of the culture of the Banbarra tribe is down to intelligence and being able to adapt to changing circumstances. Wanahomen is presented initially as a very unlikable character, which is an interesting choice for one of the major protagonists. His own character evolution, which involves learning the art of dream-magic and discovering the true nature of his father, is successfully depicted.

Other characters swirl around this central duo, though they risk feeling under-developed in comparison due to a lack of page-time. This does have the benefit of keeping a tight focus on our two main characters which the book does benefit from, but several fascinating side-characters (like Tiaanet, Nijiri, Sunandi and the Kisuan Protectors) do feel a little sold short as a result.

The thematic idea from the first novel - of people trapped in rigid and small world-views who have those views changed through a widening of their experience - is pursued and if anything is explored more intriguingly in this second volume. Wanahomen's world-view is restricted by him believing that his father was murdered and that the priesthood of Hananja is an enemy that must be punished. His own experiences in the dreaming world and his experiences with Hanani change that in a very plausible fashion. Jemisin tackles a wide variety of issues related to sexuality, abuse, gender politics and religion in the book, but never in a preachy way. Instead, she organically lets thematic elements arise from the story and characters to form a very satisfying and well-written whole.

The Shadowed Sun (****½) matches its forebear in quality and is available now in the UK and USA.
Posted by Adam Whitehead at 11:59

Email ThisBlogThis!Share to TwitterShare to FacebookShare to Pinterest
Labels: n.k. jemisin, the dreamblood, the killing moon, the shadowed sun

This was one of the best fantasy novels of 2012 for me. It took everything I loved about The Killing Moon and then raised it another level. Brilliant work.